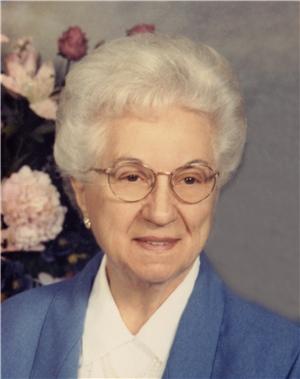 CELEBRANT
Fr. Gerald Thury
CASKETBEARERS
Kevin Koenig
Jadon Koenig
Bill Kingsbury
Dave Hosek
Larry Hosek
Lyle Hosek
MUSIC
Organist ~ Marcene Kniffen
“I am the Bread of Life”
“Goin’ Home”
“Lord You have Come”
“Oh Loving God”
“How Great Thou Art”
Agnes May Koenig was born Wednesday, October 25, 1922 at Academy, South Dakota. She was raised on a farm near Bijou Hills, located between Platte and Chamberlain. Agnes was the eighth of nine children born to Anton and Mary (Kott) Hosek. She grew up on the family farm through the Great Depression. After losing her father when she was eight years old, she and her remaining three sisters and four brothers assisted their mother in scratching out a living during those very dry and dirty 30’s. Agnes moved to Philip where she stayed with her oldest brother and attended Philip High School. She worked in Platte, Wagner and Geddes before marrying Eugene Koenig in 1947 and moved to Tyndall. Eugene and Agnes lived in Tyndall where they owned the Koenig Insurance Agency for over 30 years. They raised their two sons in Tyndall and remained in Tyndall until the death of Eugene in 2004. Agnes moved to the Springfield Assisted Living facility in 2007 and then to the Good Samaritan Society of Tyndall, where she lived until her death on Saturday, May 29, 2013, having achieved the age of 90 years, 7 months and 4 days. Family was always very important to Agnes. Highlights of Hosek family picnics and Christmas dinners centered around Agnes, her five brothers and three sisters and all of their children. With a house of over 30 people, there was always room for one more person to celebrate the season with the Hoseks. Agnes was a member of the St. Michael’s Hospital Auxiliary, the American Legion Auxiliary, and St. Leo’s Altar Society. Agnes loved music, dancing, flowers, and baking. Agnes could be seen walking around Tyndall well into her 80’s. She loved to walk ever since she was a little girl and had to walk over a mile to and from school. Like Eugene, Agnes loved her grandchildren – her pride and joy – and always had time to talk to them.
Agnes’ surviving family is comprised of her two sons: James (Kathleen) Koenig of Tyndall and their children Carolyn (Michael) Gleason, Kevin Koenig and Maureen (James) McFarlane and son Tom (Shelly) Koenig of Herndon, Virginia and their children Samantha and Jadon. Agnes has three great-grandchildren and a surviving brother, Herman Hosek.
Agnes is preceded in death by her husband, Eugene; her parents, Anton and Mary Hosek; her brothers: William, Alvin, Ben and James; and her sisters: Rose, Clara, and Grace.
To order memorial trees or send flowers to the family in memory of Agnes May Koenig, please visit our flower store.