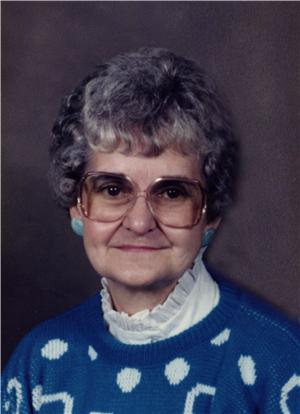 CELEBRANT
Fr. Joe Forcelle
MUSIC
Organist ~ Florence Sutera
Congregational Hymns
“Amazing Grace”
"Ave Maria"
“Hail Mary”
“How Great Thou Art”
CASKETBEARERS
Patrick Cuka
Richard Huber
Michael Cuka
James Cuka
Joey Cap
Jason Cuka
John Cap
Alice Kathryn Cuka was born on Sunday, September 23, 1928 to Frank and Mary (Schneider) Balvin on the family homestead in rural Tyndall, South Dakota. From kindergarten to the 8th grade, she attended Pleasant Ridge Grade School and graduated from Tyndall High School in 1946. On February 2, 1948, Alice was united in marriage to Joseph Cuka at St. Leo’s Catholic Church in Tyndall. For a year, she worked at Mabel Rehurek’s Beauty Shop until they moved to Gettysburg. There she worked as a cook, until they moved back to Tyndall 2 years later. In 1955, they moved out to the farm, where Alice shared in the farming duties and embraced the role of a farmwife. Throughout her life, Alice took pride in her duties as a housewife. She enjoyed cooking, gardening, sewing, embroidering, and crafts. She was a member of St. Leo’s Catholic Church and the St. Leo Altar Society.
Alice passed away on Friday, January 23, 2015 at the Good Samaritan Society of Tyndall having attained the age of 86 years and 4 months.
She is survived and remembered by her 6 children: Arthur (Donna) Cuka of Tyndall, Mary (Jerry) Huber of Yankton, Douglas (Linda) Cuka of Tyndall, Rita (Gilbert) Mendoza of Tyndall, Diane (Joe) Cap of Tabor, and Bob Cuka of Tyndall; 2 sisters: Rosemary Marek of Tyndall and Roberta Moracvec of Rapid City;  brother Francis Balvin of Rapid City; sisters-in-law: Irene Hovorka of Tabor and Margie (Cleadues) Hovorka of Tyndall; 14 grandchildren; 2 step-grandchildren; 27 great-grandchildren; and many nieces and nephews.
She is preceded in death by her husband Joseph in 1988, parents, grandparents, a daughter, a brother, and a sister.
To order memorial trees or send flowers to the family in memory of Alice  Cuka, please visit our flower store.