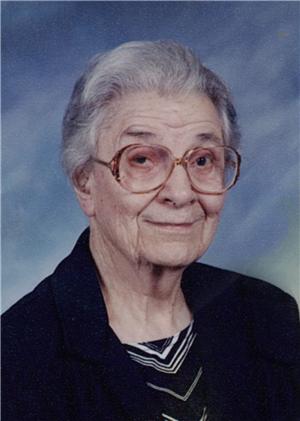 CLERGY
Rev. Barry Nelson
MUSIC
Organist ~ Karen Huether
Congregational Hymns
“Amazing Grace”
“Jesus, Savior, Pilot Me”
“Just a Closer Walk With Thee”
CASKETBEARERS
Steve Bares
Glen Batterman
Todd Bietz
Wayne Bietz
Doug Mehlhaff
Dale Werning
Ardena Pauline Mueller was born on Wednesday, January 30, 1918 near Menno, South Dakota to Henry and Pauline (Neuharth) Mehlhaff. She was baptized and confirmed in the Reformed faith and attended school through the 8th grade. Ardena was united in marriage to Roland Mueller on August 23, 1936. They farmed in the Scotland area and later went into business in Scotland. They took care of the former Zion Lutheran Church prior to the new church being built. Ardena worked as a housekeeper at the Good Samaritan Center in Scotland for 20 years. She taught Sunday school for many years and was a member of the county extension club. In 1995, she moved to an apartment in Tripp and became a resident of the Good Samaritan Society of Tripp in January of 2009. Ardena passed away on Saturday, February 16, 2013 at the Good Samaritan Society in Tripp, having attained the age of 95 years, 17 days.
Grateful for having shared her life are her daughter, Carol (Elmer) Bietz of Tripp and her son, Marvin (Patty) Mueller of Parker, Colorado; seven grandchildren: Cindy (Glen) Batterman, Joan (Dale) Werning, Wayne (Tammy) Bietz, Todd (Charlene) Bietz, Linda (Steve) Bares, Deb Francies and Shelly Anderson; 16 great-grandchildren and 11 great-great-grandchildren; a sister, Lorrine Frey, of Waukesha, Wisconsin; and a sister-in-law, Marge Mehlhaff of Rapid City, South Dakota.
She was preceded in death by her husband, parents, brothers Edgar and Ray Mehlhaff, one daughter-in-law, one brother-in-law and one sister-in-law.
To order memorial trees or send flowers to the family in memory of Ardena Pauline Mueller, please visit our flower store.