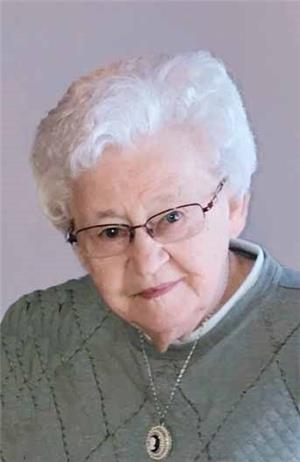 Ardina (Schoenfish) Huether, age 89, passed away peacefully and went home to the Lord on Sunday, May 2nd, 2021 while at the Avera Heart Hospital in Sioux Falls.

She was born July 28th, 1931 at the family home near Menno, South Dakota to Emil and Huldina (Wollman) Schoenfish. She was the fourth of eight children. Ardina was baptized, confirmed, and married at Grace Lutheran Church in Menno, SD.

Ardina met the love of her life, Melvin Huether, at the age of 16 one evening in Menno. After she graduated high school in 1949, she worked as a bookkeeper for a few years at Farmers Union. Melvin and Ardina were married on October 19th, 1952.Ardina and Melvin farmed together and raised their family 5 miles northeast of Tripp, SD until moving to town in the fall of 1999.

She liked gardening, canning, and did many odd jobs around the farm during their life there. Ardina found great joy in cooking, baking, reading cookbooks, and made sure there was always plenty of food to eat. She enjoyed quilting and sewing, especially matching dresses for their three daughters. While family was the primary focus of her life, her faith is what pulled her through life’s many challenges.

To order memorial trees or send flowers to the family in memory of Ardina Huether, please visit our flower store.
Open