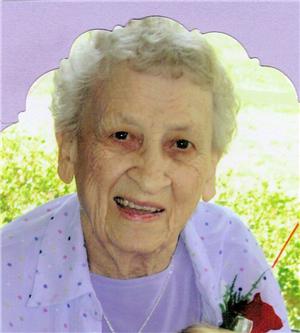 MUSIC
Organist ~ Harriet Schaeffer
"Amazing Grace"
"I'm But a Stranger Here"
"Just As I Am, Without One Plea"
"Rock of Ages, Cleft For Me"
"Abide With Me! Fast Falls the Eventide"
Bertha Pauline Eisenbraun was born to August and Susanna (Going) Goldhammer on August 27th, 1913 in Delmont, South Dakota.  She attended rural public school south of Delmont through the 8th grade.  In her teens she attended parochial school.  Bertha was married to Alvin Eisenbraun on September 3, 1933.  To this union was born six children.  Bertha showed great strength of character raising her young family during some difficult years in the depression of the 1930s and when her husband was away in the Navy during World War II.  In addition to being a homemaker, she provided child care and housekeeping services to others for a number of years.  From 1971 to 1982, she was employed as a cook at the Good Samaritan Center in Scotland, a position she enjoyed a great deal.  She was a faithful member of St. Paul’s Lutheran Church in Scotland where she taught Sunday school, attended Bible classes, and was very active in the choir.  She was a long-time President of the Lutheran Women’s Missionary League.
Bertha’s favorite pastimes were singing, baking, cooking, and crossword puzzles and Scrabble.  She baked pies and kuchen in large quantities for her family, neighbors and friends.  In her retirement years, Bertha and Alvin volunteered in a variety of ways throughout the Scotland community, including serving Meals on Wheels to others.  Bertha and Alvin moved to Majestic Bluffs in Yankton, SD, in December of 2002.  Bertha enjoyed making new friends and taking part in all the activities throughout the last eight years at Majestic Bluffs where she was always grateful for the loving care that she received.  She said goodbye to her husband of over 70 years in April of 2004.  Bertha died peacefully with her family around her on Friday, October 22nd, 2010 at Avera Sister James Care Center at the young age of 97 years.  She was still singing her favorite hymns up until the last day of her life on earth and told us that she was looking forward to joining the alto section of the celestial choir of angels.
Grateful to have shared the love that Bertha provided them are her five surviving children:  Dal (Carol) Eisenbraun of Tucson, Arizona; Darrell (Doreen) Eisenbraun of Chandler, Arizona; Diane (Allen) Gross of Mayetta, Kansas: Deborah (Jerry) Raabe of Volga, South Dakota; Dan (Patti) Eisenbraun of Yankton;  along with 14 grandchildren and 11 great-grandchildren.  Pallbearers for her funeral are Mike Eisenbraun, Kim Neidecker, Chris Gross, Ryan Raabe, Kristin Hausmann, and Danielle Raabe.  Honorary pallbearers are Pam Eisenbraun, Jon Eisenbraun, Deb Glass, Erica Bobby, Jeff Eisenbraun and Brandon Eisenbraun.
Bertha was preceded in death by her husband Alvin, her son Donald, and by her two sisters and two brothers.
In lieu of flowers the family requests that memorials be directed to Avera Sacred Heart Foundation in Yankton, South Dakota.
To order memorial trees or send flowers to the family in memory of Bertha Pauline Eisenbraun, please visit our flower store.