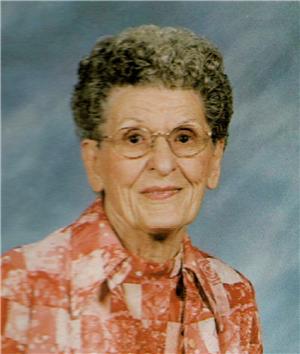 CLERGY
Fr. Mathew Vazhappilly
Blanche Gladys Nelson, 90, passed away peacefully on Saturday, September 15, 2012 at the Good Samaritan Society of Scotland.
Mrs. Nelson was born at home in Scotland, South Dakota on January 18, 1922. She was the second daughter of Albert and Mary (Kozel) Drinovsky. Her older sister, Alma, predeceased her.  Blanche married Harry Leroy Nelson on July 12, 1941 in the rectory of St. George Catholic Church. Harry was leaving for the military and she wanted to go with him. She followed Harry during military training to Texas, North Carolina, Oklahoma and Georgia. When Harry left to fight in WWII, she returned to Scotland. They were married for 48 years before his death in 1989. They both loved Scotland and remained there for their entire lives. Blanche had a unique sense of humor and mischievous spirit that will be remembered by all those who knew her.
Survivors include her two daughters: Marilyn Barclay of Denver, Colorado and Sandra Walloch and husband Don of The Villages, Florida. Mrs. Nelson’s five grandchildren are: Troy Barclay and wife Caitlin of Denver, Andrea (Walloch) and husband Tim Messer of Charlottesville, Virginia, and Donny, Justin and wife Jamie, and Nick Walloch of the Atlanta, Georgia area. Her great-grandchildren are Casey Barclay, and Malia and Maile Messer.
At the request of the deceased, no funeral Mass was held. She requested a private graveside service instead. In her memory, please buy a friend a candy bar or a red rose, since she loved both. Those wishing to make a donation in Blanche’s name may do so to either St. George Catholic Church or the Good Samaritan Society of Scotland.
To order memorial trees or send flowers to the family in memory of Blanche Gladys Nelson, please visit our flower store.