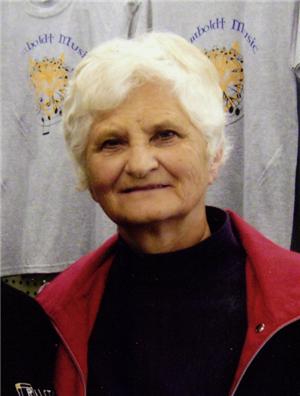 CLERGY
Rev. Dean Schroeder
MUSIC
Pianist & Soloist ~
Brenda DeJong Schneller
Congregational Hymns
“Old Rugged Cross”
“In the Garden”
“How Great Thou Art”
ACTIVE CASKETBEARERS
Brandon Hertz
Robert DeJong
Jim Crabtree
Steve Burke
Eldon Lindquist
Peter Schumacher
Gary Lacompte
Paul Rolston
HONORARY CASKETBEARERS
Carol’s Youngest Grandchildren
Carol Jean Burke was born on April 2, 1943 to Marion Louis and Ida Lucille (Kocourek) DeJong in Yankton, South Dakota. She attended Utica Grade School and graduated from Yankton High School. Carol went on to attend Springfield USD where she met and fell in love with Bryant E. Burke. On November 21, 1962, Carol was united in marriage to Bryant in Yankton. In the same year, she earned her teacher’s certificate. For three years, Carol taught school until giving birth to her first son Bryan in 1965 and devoted herself as a stay at home mom. Throughout her life, she blessed her family with her talents in gardening, cooking, and baking.
In 1977, as her children got older, Carol began to work out of the home as a Conservation District Manager for the Soil Conservation Service. She truly enjoyed her job and would continue to serve in that position until her retirement in 2006.
At the age of 38, with three young children at home, Carol was diagnosed with breast cancer. Upon hearing the diagnosis, she wasn’t concerned about herself, but rather worried over her children stating she still had so much she wanted to do for them. Bryant accompanied Carol to her radiation treatments in Sioux Falls until she requested for him to return to work to provide for their family during their difficult time. She went on to drive herself to and from radiation treatments early in the morning, returning home around noon, then heading straight into work for the rest of the day. Even though she was sick, weak, or in pain, family always came first to her. By the grace of God, she was healed of her cancer and she was able to continue in her calling as a wife and mother.
Carol was a doting, proud grandmother. She spent countless hours in her life watching, supporting, entertaining, and teaching her grandchildren. Every one of their visits, achievements, or events were worth celebrating. For them, she formed new and lasting family traditions for the holidays, such as the ever-increasing Easter egg hunt (this year’s haul numbering 250 eggs).
Carol loved her family above all else, and even when her health failed her she was a loving, caring, and faithful Christian woman. Her quiet strength and perseverance was a humbling illustration of Christian faith. From the time they were little to the present when they now have their own little ones, Carol’s children saw her life and actions as a testament of her faith.
On Monday, July 11, 2016, while surrounded by her family, Carol went home to be with her Lord and Savior having attained the age of 73 years, 3 months, and 9 days.
She is survived and loved by her husband of 53 years, Bryant Burke of Tyndall; children: Bryan Burke of Spokane, WA, Michael (wife Tammy) Burke of Rapid City, SD, and Amy (husband Dave) Burke Hertz of Vermillion, SD; grandchildren: Brandon Hertz, Emily Burke, Natalie Hertz, Alyssa Burke, and Ty Hertz; brother Robert (wife Janice) DeJong of Lesterville, SD; and sister Joyce (husband Jim) DeJong Crabtree of Humboldt, IA.
She is now reunited in Heaven with her beloved parents and infant half-sister Elizabeth.
To God be the Glory.

To order memorial trees or send flowers to the family in memory of Carol  Burke, please visit our flower store.