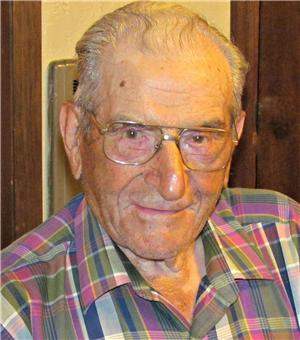 CLERGY
Rev. Tom Petersen
MUSIC
Pianist ~ Melissa Bruna
Congregational Hymns
“Abide with Me”
“I Know That My Redeemer Lives”
“Joy to the World”
CASKETBEARERS
Jeremy Bruna
Ross Hudson
Frank Bruna
Joey Bruna
Gene Melichar
Jerry Kostal
Charles A. Bruna was born near Tabor, SD on October 24, 1918 to Josef and Frances (Stybla) Bruna.  Growing up, Charles worked on the family farm in addition to working for several neighboring farmers.  He was also a member of a traveling custom corn picking group.
On February 11, 1947, Charles was united in marriage to Libby Pavlish in the Tyndall United Methodist Church.  One son, Ron, was born to their union.  Charles and his family spent their lives working diligently and taking pride in the family farm.  Charles spent his free time enjoying his family – most often gathering around the kitchen table to play pinochle.  He was also an avid outdoorsman and enjoyed hunting, fishing, and pitching horse shoes.  Charles took great pride in his Czech heritage and frequently honored it with the songs he played on the accordion or the harmonica.  In his early years you could find him with drum sticks in hand behind the snare as a member of the Sejnoha Band.
Charles taught us all that work was truly a blessing from God.  He lived his faith every day of his life as he tended to his crops and livestock.  At the age of 95 he planted this spring’s fields of corn and beans and followed their progress through the harvest.  He died peacefully at St. Michael’s Avera Hospital on December 20, 2014.
Charles is survived by his two sisters: Zdenka Pavlish and Vlasta Hajek; his son Ron Bruna and his wife Donna; his grandson Jeremy Bruna and wife Melissa; his granddaughter Miranda Hudson and her husband Ross; and three great grandchildren, Erika, Eagan, and Kalem.
He was preceded in death by his wife, Libby, his parents, three sisters, and two brothers.
To order memorial trees or send flowers to the family in memory of Charles "Charlie" Anton Bruna, please visit our flower store.