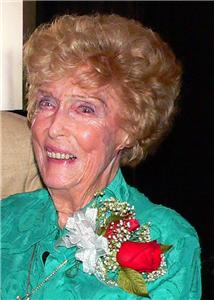 Charlotte Katheryn Eisenmann was born in Scotland, South Dakota on February 16, 1921, to Charles and Leonora Eisenmann.  An only child, she spent her childhood there, graduating from Scotland High School, Class of 1939.  She was the drum majorette in the Scotland VFW band while growing up.  Charlotte attended and graduated from Augustana College in Sioux Falls, SD in 1944, majoring in Economics.
Charlotte’s love of travel and learning about new places led her to become a stewardess for United Airlines, domiciled in Chicago. Flying on DC-3 aircraft, she loved the job. She was reaching seniority to fly the Hawaii run, when WWII ended, and she married Walter A. Zeeb on August 25, 1945.  She and Walter had known each other since first grade. Due to rules at the time, she was forced to quit flying upon her marriage, without seeing Hawaii.
Ike worked as the registrar of the Trade School at Boys’ Town, while Walter pursued his dental degree at Creighton University.  Upon his graduation in 1950, the couple moved to Denver, residing there until 1989.  In 1953, Charlotte and Walt welcomed their son, Charles; in 1955, the family increased by one with the arrival of their daughter, Katheryn. Charlotte was a devoted and caring mother; her children were always greeted by her when arriving home from school.
A talented artist, involved in many art activities, including the Littleton Art Guild, she tried several media, including oil painting, watercolor, and mixed media.  Her style interests ranged from contemporary, impressionist, to landscapes.  Following a visit to the Grand Tetons with her family, she painted a scene of Mount Moran to remember the grandeur of the place.  Prior to every dinner party she and Walt hosted, we would see her in the living room with oil paints out, trying to “fix” the water in the lake; she was never satisfied with the painting.  Her family cherishes it and always thought it was fine!
The couple first visited Hawaii in 1972, and purchased a condominium on Kauai, with five other couples, in 1980.  When Walt retired, they had already purchased a home site in Kalaheo, Kauai, and construction of their retirement home was under way.  Charlotte quickly found the opportunity to further her art studies in oils, watercolor, Oriental brush and Plein Aire techniques.  She took so many courses at Kauai Community College, she had enough credits for an Art degree.  Also studying under Steven Sands, painting on location around the island, she honed her eye for the unique landscapes of Kauai.
Charlotte and Walt moved back to the Denver area in 2005, to be near better medical care for Charlotte, family and friends.  Charlotte suffered from Parkinson’s, which ultimately took her from us.  Charlotte enjoyed re-connecting with old friends and attending the semi-annual “Equinox” party started many years ago to celebrate friendship.
Charlotte is survived by her husband of 64 years; her son, Chuck (Sherry); daughter, Kaki; four grandchildren; four great-grandchildren.
Her wishes are, in lieu of flowers, donations to:
Island School, Kauai (3-1875 Kaumuali’i Highway, Lihu’e, Hawai’i  96766)
Denver Dumb Friends League  (www.ddfl.org)
St. Paul’s Episcopal Church on West Kaua’i (PO Box 247, Eleele, HI 96705)
Parkinson’s Association
The Denver Hospice (www.thedenverhospice.org)
Or a charity of your choosing
Charlotte will be interred next to her beloved parents in Scotland, SD, on Saturday, January 16, at 1:00 PM.  A memorial service is scheduled for Saturday, January 30, 11:00, Horan & McConaty at Parker Road and Dartmouth, Aurora, Colorado.
To order memorial trees or send flowers to the family in memory of Charlotte Katheryn  Zeeb, please visit our flower store.