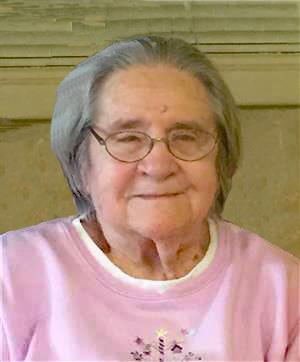 Clara Bitterman, age 90, of Delmont, passed away Thursday, October 8, 2020 at Avantara Care Center of Armour. Her funeral service will be at 1:30 p.m., Tuesday, October 13th, Hope Lutheran Church of Delmont. Visitation will be 5 to 7 p.m., Monday, October 12th, at the Hope Lutheran Church at Delmont with a prayer service at 7 p.m.
Clara Ella Bitterman was born Friday, September 12, 1930 to Walter and Martha (Hauck) Berndt of rural Avon, SD. She was born in a little farm house on the corner of Highway 37 and Highway 46.
Clara was married to Don Bitterman November 5, 1955 in Delmont Hope Lutheran Church. Clara was baptized shortly after they were married.
She raised her sons and worked at the family farm. Clara enjoyed sewing, baking and gardening. Clara enjoyed spending time with her family, including her granddaughters.
She is survived by her husband Don; two sons, Steve (Steph) Bitterman of Huron and Ron (Kristi) Bitterman of Mitchell; three granddaughters; two step grandchildren; one great grandson and five step great grandchildren.
Clara was preceded in death by her parents Walter and Martha (Hauck) Berndt, an infant sister Ruth Berndt, sister Lorraine Schempp and brother Norman Berndt.
The Bitterman Family ask that masks be worn and social distancing observed at all times.

To order memorial trees or send flowers to the family in memory of Clara Ella Bitterman, please visit our flower store.
Open