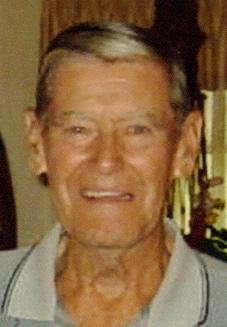 CLERGY
Rev. Richard Weeman
MUSIC
Organist ~ Andra Semmler
Congregational Hymns
“Amazing Grace”
“What is the World to Me”
“I Know That My Redeemer Lives”
CASKETBEARERS
Rick Mayer
Lonnie Mayer
Tony Bergstrom
Mike Bergstrom
Ryan Snuggerud
James Bollock
Clarence Eisenbraun was born in Tripp, South Dakota on Monday, September 26, 1921 to Walter and Elsie (Ahntholtz) Eisenbraun. He grew up in Hitchcock, South Dakota, graduating from high school there in 1939. Throughout his youth, he spent summers on his grandfather’s farm in Tripp. He was confirmed in the Emmaus Lutheran Church in Tripp. After graduation, he spent a couple of years helping area farmers and also served in a CC Camp in the Black Hills. He entered the U.S. Army in 1942 and served in the infantry in Germany during WWII. He was honorably discharged in 1946 as a 1st Lieutenant. Upon his return home, he purchased the Standard Oil Bulk Business in Tripp and ran it until his retirement. Clarence was united in marriage to Lucille Schneider on June 10, 1947. Together they raised three children and were active in their community. His favorite pastime was golf. He and Lucille spent 18 wonderful winters in Mesa, Arizona with other family members and friends. Due to failing health, Clarence became a resident of the Good Samaritan Society of Tripp. He passed away at Avera St. Benedict Health Center in Parkston on Monday, January 10, 2011 at the age of 89 years, 3 months and 15 days.
Clarence is survived by his wife of 63 years, Lucille, of Tripp: two daughters: Karen (Mike) Bergstrom and Jane Hatch, all of Sioux Falls; four grandchildren: Erin and Tony Bergstrom, Jill (Ryan) Snuggerud and Rachel Hatch, all of Sioux Falls; two sisters: Rosemarie Mayer of Tripp and Shirley Rundall of Mitchell; and one brother: Frank (Dina) Eisenbraun of Colliersville, Tennessee.
In addition to his parents, Walter and Elsie Eisenbraun, Clarence was preceded in death by his son, Dale Eisenbraun and two sisters, Marjorie Eisenbraun and Bernice Bollock.

To order memorial trees or send flowers to the family in memory of Clarence  Eisenbraun, please visit our flower store.