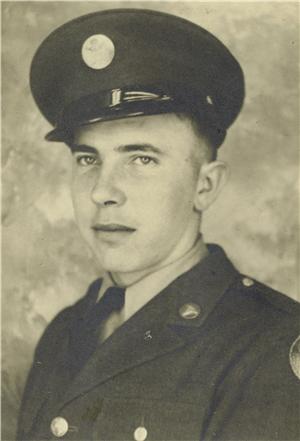 CELEBRANT
Fr. Joe Forcelle
MUSIC
Organist ~ Cindy Luidens
Soloist ~ Lisa Knoll
“Our Father”
“God Bless the USA”
Congregational Hymns
“America the Beautiful”
“Psalm 23”
“Amazing Grace”
CASKETBEARERS
Jackie Vaith
Corey Vaith
Paul Hovorka
Whitney Hovorka
Tim Hovorka
Chuck Hovorka
Ron Hovorka
Bob Cuka
Cleadues Norman Hovorka was born on the family farm southeast of Tyndall, Wednesday, May 18, 1921 to Ambrose and Amelia (Blaha) Hovorka. He went to McCrea country school district #60. He entered the Army Air Corps in April 1942 during WWII and served in the European Theatre as an Army Medic. He was discharged in August 1945. Cleadues then farmed by Tabor for 22 years. He married Margie Cuka on February 19, 1952 and the couple had 2 children, Jerome and Joanie. They bought a farm northeast of Tyndall in 1964 where they lived until he retired in 1986. They then moved to Tyndall until 2012 when he became a resident of the Good Samaritan Society of Tyndall after an accident.
For 70 years, he was a proud and active member of the American Legion Kortan-Hatwan Post 183 of Tabor and the VFW Simek-Ptak Post 6895 of Tyndall where he was also a charter member.
Cleadues served on the school board for Clear Lake School District #18. He was a long time member for the NFO, drove the school bus for several years, was on the County Weed Board, and was a janitor at St. Leo Catholic Church.
Cleadues was gentle, loving, and caring. A man of few words. He loved his country, family, the land he worked, and the MN Twins. Cleadues’ children and grandchildren loved listening to grandpa play the accordion, which he played for 80 years. He learned to play while listening to his mother sing the songs in Czech. As a member of the Tyndall Accordian Club, he enjoyed playing for numerous occasions.
He had a strong faith and was a devout Catholic and member of St. Leo Catholic Church and honorary member of the Knights of Columbus.
Cleadues passed away on Tuesday, February 17, 2015 at the Good Samaritan Society of Tyndall having attained the age of 93 years, 8 months, and 30 days.
Survivors include his wife Margie Hovorka of Tyndall; children: Jerome (Darla) Hovorka of Tyndall and Joanie (David) Auch of Tyndall; grandchildren: Amy (Jack) Eckert of Tyndall, Jackie (Corey) Vaith of Menno, John Hofer of Yankton, Paul Hovorka of Tyndall, and Whitney Hovorka of Tyndall; step-grandson Jason (Tenille) Stahlecker; great-grandchildren: Peyton Eckert, Kaiden Hofer, Mirik Vaith, Parker Vaith, and Abbie Eckert; step-great-grandchildren: Deacon, Dylan, and Latasha Stahlecker; brothers: Herman Hovorka of Tabor and Richard (Sharleen) Hovorka of Tabor; sister Geneva (Melvin) Delzer of Mitchell; and sister-in-law Irene Hovorka.
Cleadues was preceded in death by his parents; brothers: Lloyd, Willard, Alvin, and Lester; sisters: Eleanor Kiehlbauch and Loreen Novak, and great-grandchild Mallory Vaith.
To order memorial trees or send flowers to the family in memory of Cleadues  Hovorka, please visit our flower store.