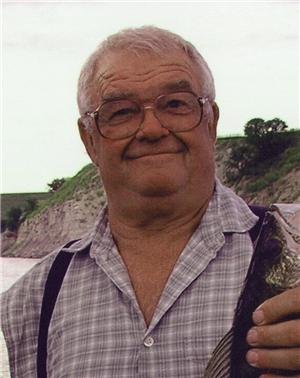 CLERGY
Rev. Greg Way
MUSIC
Organist ~ Pinky Huether
Congregational Hymns
“How Great Thou Art”
“Amazing Grace”
“Nearer, My God, To Thee”
Curtis Allen Schnabel was born on Tuesday, May 10, 1932 to Karl and Christine (Weiderich) Schnabel in Parkston, South Dakota. He attended Parkston and Tripp High Schools and following his graduation he went on to complete a six month course on Dairy Husbandry in college. On February 15, 1953, Curtis enlisted in the United States Army in Sioux Falls, and went on to serve his country in the Korean War. In January 1955, he was honorably discharged with honors from the military having attained the rank of Master Sergeant. He also served in the National Guard and American Legion. In 1956, he was united in marriage to Ethellyne M. Shindelbower in Tripp. Curtis worked at the Tripp Creamery and then for Hattendorf Construction. He ultimately started his own construction company, Curtis Schnabel Construction, where his ingenuity was fully realized. He ran his business for several years until retiring in 1998. In his spare time Curtis loved hunting and fishing, even raising his own pheasants.
Curtis passed away on Tuesday, September 22, 2015 at his home in Tripp having attained the age of 83 years, 4 months, and 12 days.
He is survived and remembered by his wife of 59 years Ethellyne Schnabel, sons: Mark Schnabel of Lincoln, NE, Jerry (Janelle) Schnabel of Colorado Springs, CO, Thomas Schnabel of Littleton, CO, and Kelly Schnabel of Tripp; and six grandchildren.
He was preceded in death by his parents; brothers: Reno Schnabel, Roland Schnabel, and Ruben Schnabel; and one sister, Lili Hoenke.
He will be greatly missed by us all and we thank him for being a wonderful husband and father.
To order memorial trees or send flowers to the family in memory of Curtis Allen Schnabel, please visit our flower store.