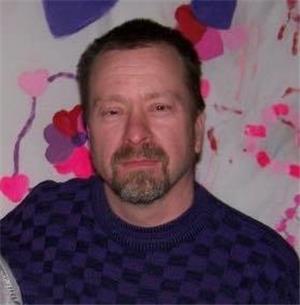 Dave Eldon Eschen, 59, died peacefully at his residence in Pierre, South Dakota on February 20, 2019.  Dave was born in Pierre on May 22, 1959 to Carl Eldon Eschen and Virginia Helen (Middleton) Berry Eschen.   Dave attended school in Pierre and graduated from Riggs High School.
Dave worked at Sunshine Grocery Store before getting a full time job at Dakotamart and that’s where he met Lori Morris in aisle 5, the baking aisle.  She baked her way into his heart.  They were married June 1, 1991.   Dave went to work at the State of South Dakota as a custodian and working his way up to the supervising lead worker position. Adam Paul was born in 1993 and Betsy Rose in 1996 . Dave retired from The State in September 2018 due to health issues.
Dave and Lori divorced in 1998.  Dave was an important part of his children’s lives introducing them to fishing, guns, bow hunting, motorcycle riding and camping. He loved spending time with his kids. He was so proud that Adam followed in Carl’s footsteps with a career in law-enforcement. Dave was thrilled to recently learn of Adam‘s promotion to deputy sheriff. His daughter was the sparkle in his eye.  Betsy became a nurse and Dave often talked about visiting her in North Platte.  He was so proud of her.
Dave loved motorcycle riding and often took Adam and Betsy on rides.  Dave also rode to Ipswich to see his father-in-law. He and Melvin remain very close.  When Mel came to town he would stay with Dave and they could be found shopping all over town especially Value Village and Hospice. They both took pride in finding bargains. They usually ended their evening with a few beers.
Dave enjoyed deer hunting and didn’t go as much as he’d like but when he did, he would hang the deer in the garage until it was processed. His homemade jerky was liked by many.
Dave is survived by his son Adam, Sioux Falls and his daughter Betsy, (Nathan Jurgensen), North Platte, NE, half sister Deann Crouch (Troy), Brownwood, Texas; Barb Adams (John) Sacramento, California; half brother Bob Berry, Pierre and step brother Jim Goglin, Tyndall; and stepmom Ramona Eschen, Tyndall; niece Abby Crouch and family,  Brownwood, Texas, nephews Eldon Goglin (Jessica) and family of Huron; TJ Crouch and family of Brownwood; John Carl and Samuel Adams, Sacramento, CA; numerous Middleton relatives, and his ex-wife Lori Morris Eschen of Pierre.
Dave was preceded in death by his mother Virginia, his father Carl, half sister Carol Larson, nephew Matthew Larson, nieces Tearakay Goglin, and Joshlyn Larson; mother and father-in-law, Darlene and Melvin Morris.
Condolences can be sent to Betsy Eschen at 214 West Philip Ave, North Platte, NE 69101 and to Adam Eschen 162 Skerrols St. Apt C2 in Pierre, SD 57532.

Memorial services will take place in June 2019.
To order memorial trees or send flowers to the family in memory of Dave Eldon Eschen, please visit our flower store.