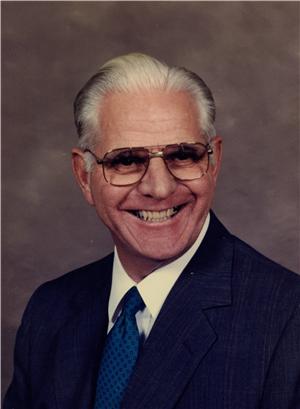 CELEBRANT
Fr. Joe Forcelle
MUSIC
Organist ~ Kathy Koenig
Soloist ~ Lisa Knoll
"Serenaded by Angels"
Congregational Hymns
"How Great Thou Art"
"Amazing Grace"
"On Eagle's Wings"
"Daddy's Hands"
CASKETBEARERS
David Balvin
Matthew Balvin
Jared Balvin
Travis Balvin
John Tjeerdsma
Jeffrey Tjeerdsma
Michael Tjeerdsma
David Lewis Balvin was born on Friday, November 29, 1929 on the family farm six miles southeast of Tyndall, South Dakota to Frank and Mary Beatrice (Schneider) Balvin. He attended Pleasant Ridge Country School and graduated Tyndall High School in 1947. On December 27, 1950, David was united in marriage to Dolores Humpal. David spent his life working hard while farming, custom farming, and raising his family in Bon Homme County until his retirement in 1982. On September 16, 2004, David became a resident of Springfield Assisted Living Center and later transferred to the Good Samaritan Society of Tyndall on August 3, 2009. During his time at the Good Sam, David helped with many of the repairs and small maintenance projects needed at the nursing home. In everything he did, David aimed for the best outcome; be it walking the fields, cleaning and polishing his machinery and auto, wood-working, or taking pictures. From the time of his youth into his stay at the nursing home, David had a green thumb. He took pride in the bountiful crops and beautiful flowers he nurtured, even lending his talents to the Assisted Living Center in the care of both their indoor and outdoor plants.
David died on Saturday, February 22, 2014 having attained the age of 84 years, 2 months, and 24 days.
He is survived by five children: Alan (Susan) Balvin of Tyndall, Charlene Tjeerdsma of Tyndall, Terry (Lisa) Balvin of Tyndall, Randy Balvin and special friend, Michelle Brigance of O’Neill, NE, and Greg (Vicki) Balvin of Springfield; sixteen grandchildren; twenty-two great-grandchildren; one brother, Francis Balvin of Rapid City; and 3 sisters: Rosemary Marek of Tyndall, Roberta Moravec of Rapid City, and Alice Cuka of Tyndall
He was preceded in death by his parents, Frank and Mary, brother Frank in infancy, and sister Anna Marie Fuchs.
To order memorial trees or send flowers to the family in memory of David Lewis Balvin, please visit our flower store.