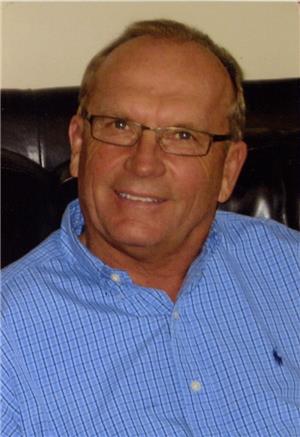 CELEBRANT
Fr. Charles Cimpl
MUSIC
Organist ~ John Thuringer
Special Music ~ Kraig & Morgan Kronaizl
“Here I Am Lord”
Morgan Kronaizl ~ “On Eagle’s Wings”
Kraig Kronaizl ~ “Amazing Grace”
Linda Kronaizl ~ “Ave Maria”
Congregational Hymns
“Be Not Afraid”
“You Are Mine”
CASKETBEARERS
Roy Seaverson, Brad Pfeifle, Evan Parker,
Keith Vanden Bosch, Ken Schaaf,
& Cale Slack
David John Kronaizl was born on October 5, 1949 to John Stanley and Mabel Ann (Slaba) Kronaizl on the family farm in rural Scotland, South Dakota. As a child, he attended Geishert Grade School, graduated from Scotland High School, and later attended Nettleton College. For a year, David worked for Hattendorf Construction before enlisting in the U.S. Army National Guard and serving at Ft. Leonard Wood, Missouri for 2 years. Upon his honorable discharge, he began to work for S.S. White/Healthco in dental equipment repair for 15 years. He then worked for Patterson Dental in dental equipment sales. In the 15 years that he worked for Patterson Dental, he was the top regional salesman for many years and at one time was also in the national top 10 salesmen of the year.
David’s passion was hunting, fishing, and golfing with all his friends. He truly loved hunting, which is why in 1998, David with several of his closest friends formed their own hunting ranch near Gann Valley, South Dakota called Buffalo Creek Ranch. Some of his proudest moments was when his beloved dogs, Casey and Abbie, would return pheasants for him.
David considered all of his friends as his family. At the drop of a hat, he was ready to help his loved ones. There was nothing he wouldn’t do for his friends and family. David was always joyful, and it was difficult to truly upset him. He was a man who would make the best of a difficult situation.
David passed away peacefully on Wednesday, November 9, 2016 at the Dougherty Hospice House in Sioux Falls having attained the age of 67 years, 1 month, and 4 days.
He is survived and remembered by his fiancée Mary Rose of Sioux Falls; sister Dianna (Darrell) Van Ravenswaay of Sioux Falls; brother Dennis (Linda) Kronaizl of Scotland; niece Heather (Corbin) Womac; and nephews: Ryan Kronaizl, Kraig (Morgan) Kronaizl, and Michael Kronaizl.
He was preceded in death by his father in 1972, mother in 2016, and brother Daniel Thomas Kronaizl in 1983.
The family wishes to express a special thank you to the Hospice staff and Dougherty House staff for their wonderful care of David. Thank you.

To order memorial trees or send flowers to the family in memory of David John Kronaizl, please visit our flower store.