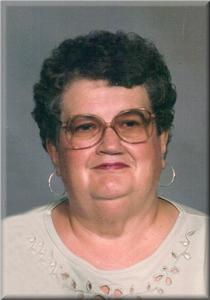 CLERGY
Rev. Gregory Way
MUSIC
Congregational Hymns
"Amazing Grace"
“How Great Thou Art”
CASKETBEARERS
Donald Holm
Glen Wudel
Chris Bauder
Dennis Fuerst
Terry Kirschenmann
Billy Harp, Jr.
Delores Louella Schultz, daughter of David and Hulda (Heihn) Wudel, was born on Tuesday, January 12, 1932 near Parkston, South Dakota.  She was baptized on March 13, 1932 and confirmed on April 7, 1946. She attended public school near Parkston. Delores was united in marriage to Nathanael Schultz on November 29. 1953. To this union a daughter, Diane, and a son, Larry, were born. She and Nathanael farmed southwest of Parkston until 1990 and they moved to Tripp in November of 1996. She enjoyed ceramics, doing cross-stitch embroidery and she loved gardening. She will be remembered for her wonderful cooking and baking. Her specialties included cinnamon rolls, rice and raisins and German dishes such as knoephla. Delores passed away on Saturday, January 9, 2010 at Avera St. Benedict Health Center, having attained the age of 77 years, 11 months and 28 days.
She is survived by her two children: Diane (Karl) Kuper of Tripp and Larry Schultz and fiance Melissa Lohr of Tea; and four grandchildren: Ryan Kuper, Scott Schultz, Nathan Schultz and Amy Schultz.
In addition to her parents, Delores was preceded in death by her husband, Nathanael on May 8, 2001; a granddaughter, Heidi Schultz; three sisters: Violet (William) Bauder, Gertrude (Charles) Bauder and Esther (Hans) Holm; and a brother, Elmer (Viola) Wudel.
To order memorial trees or send flowers to the family in memory of Delores Louella Schultz, please visit our flower store.