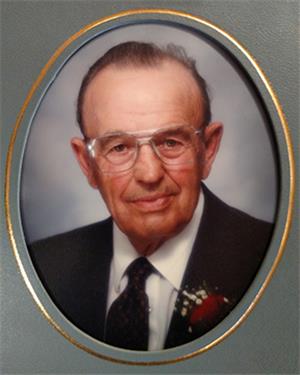 Donald Lloyd Collinge, better known as Jack, was born on December 17, 1921 to Charles and Mary (Holbert) Collinge on the family farm in Hutchinson County near Tripp, South Dakota.
Jack attended country school and after eighth grade helped at home. He later took a job working for Charles and Mary Stverak helping out on the farm. He worked for them for seven years. Then on December 29, 1941 he married Ruth Stverak, daughter of Charles and Mary Stverak.
Jack and Ruth moved to the Collinge farm where he continued to farm, shell corn, and haul grain and cattle for people. Ruth was a school teacher, and she taught in the country schools for many years.
Ruth passed away on October 31, 1973. They had no children.
Jack married Laurelle "Cookie" Mudder on May 28, 1991. They moved into Scotland and resided there until February 27, 2017. They then moved to the Good Samaritan Society for health issues.
Grateful for having shared Jack's life is his wife of 25 years, Laurelle, his two step children, Gary and Greg Mudder, and many nieces and nephews.
Jack was preceded in death by his parents, four sisters: Mabel Colwell, Elsie Johnson, Lillian Lux, and Elvie Heihn, and three brothers: Clifford, Hildred, and Glen.

one hour prior to service

To order memorial trees or send flowers to the family in memory of Donald "Jack" Collinge, please visit our flower store.