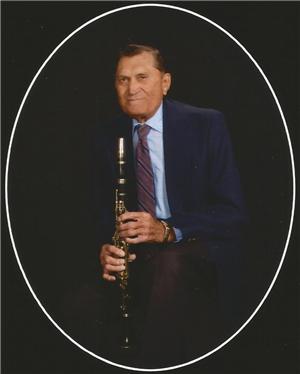 Don Paul was born to Steve and Elsie (Uherka) Paul on January 12, 1933, a day so cold that the water on their kitchen stove froze in the kettle.  His growing-up years on his family farm near Tyndall were filled with hard work, but the long winter nights gave Don plenty of time to perfect his snooker skills with his brothers.  During the especially snowy winter of ‘48-‘49, Don moved to town so that he was able to regularly attend high school.  It was that winter, spent with his Grandpa Uherka, a fine musician, that he discovered the clarinet and his love of music.  Don graduated from Tyndall High School in 1950 and was, by then, playing dance jobs with local bands and farming with his father.  The musicians from those days became life-long friends.  He joined the Army in 1952 and, as a military musician, studied at the Navy School of Music in Washington, D.C.  He spent the next 3 years as a member of the Fifth Army Band, a talented group of musicians who played with the likes of Henry Mancini and Bill Evans.
Playing music was a passion for Don and over the years provided many opportunities for travel adventures.  One such adventure was his first job after graduating from the University of South Dakota:  teaching instrumental music in Sitka, Alaska, where he met his future wife Susan Holmes.  They were married in Tyndall in 1963 and Don continued to teach students for about another decade.  He loved playing in old-time and dance bands more than he loved sleep, so in addition to his day jobs of teaching and farming, he continued playing dance jobs several nights a week, often more than a hundred miles from home.  As a devoted, inspiring educator, he made a significant positive impression on his students.  Many went on to become accomplished, professional musicians; many more gained a lifetime love of music and learning.
As he turned his focus from teaching to farming, the same hands that had nimbly played “Flight of the Bumble Bee” in college began picking rocks, mending fences, and repairing machinery.  The adventuresome spirit that had taken him to Europe during his dance band years took him to Australia one winter to combine wheat during their harvest season.  He thought a field of wheat, golden in color and swaying in the wind, was one of the most beautiful things on earth.  Always, Don was a good neighbor and farmer, treating both people and the land with respect and integrity.  Most of all, during those years he was a rock-solid father, unwaveringly supporting his family.
In later years, health issues limited Don’s activities but never diminished his fun-loving, optimistic spirit.  Don enjoyed the first shift of morning coffee at the Corral for many years, where topics of discussion ranged from the crops to global politics:  he was never shy to share his convictions, even those that were alternate viewpoints, in his usual light-hearted way.  He continued to appreciate local music performances, to mentor young musicians, to be interested in the activities of neighboring farmers.  He gradually retired from farming, entrusting care of his land to a new generation of farmers.  Until the day of his death on July 1, 2013, Don was always an important part of the daily lives of his children and grandchildren, delighting in their activities and antics and administering advice only when asked, which turned out to be often because what he said invariably was sage and right and true.
Don was dearly loved and admired by many who will miss him, especially the surviving members of his immediate family:  his wife Susan of 50 years; daughters Fern, Natalie, Grace, Stephanie; Brazilian exchange student Maria Jose (Zeka) Nicolai Silva Barbero who became an ‘adopted’ daughter; son-in-law John; grandchildren Stefan, Raquel, Reese, Quintin, Grace, Elise, and Cooper; and brother Ken.  He was preceded in death by brothers Vern and Steve and sons-in-law John Frerichs and Christian Aviles.
In his memory, the Don Paul Memorial Fund has been established at the Tyndall Security State Bank. The fund will support music in the community and encouragement of aspiring musicians.
To order memorial trees or send flowers to the family in memory of Donald Lee Paul, please visit our flower store.