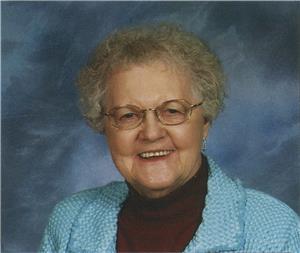 Donna Mae Sternhagen was born on August 30, 1930 to William and Helena (Sayler) Sternhagen in Scotland, South Dakota. She graduated from Scotland High School in 1948 and from Mercy School of Nursing, Sioux City, Iowa in 1952. She married Emil Orth on October 12, 1952. They lived in Sioux City Iowa and Scotland South Dakota. Emil passed away on February 12, 1963.  She married Gary Bell on August 10, 1969. They moved to Onida, South Dakota in 1972 and to Roswell NM in 1976.
She worked as an RN   at Sacred Heart Hospital in Yankton, SD, the Scotland Clinic, St. Michael Hospital in Tyndall, the Scotland Good Samaritan Center and  Eastern New Mexico Medical Center where she retired from her nursing career of 42 years   in 1994. She was a dedicated nurse and inspired and mentored many in her chosen field.
In her retirement she enjoyed knitting, quilting, traveling and volunteering with the hospital auxiliary and at her church, First Presbyterian where she served as a Deacon for many years.
In 2011 she moved to Peach Tree Retirement Community and to the Heartfelt Manor in February of 2018, where she passed away on March 23, 2018 at the age of 87.
Donna had a very kind and giving heart and will be missed by all who knew her.
She is survived by her children, Jane (Dr. Jim) Rokusek of Watertown, SD, Kathy Orth, of Fargo, ND, and Nancy (Kenny) Forrest of Roswell, NM.  Grandchildren, Anna (Tim ) Olson of Alexandria, MN, Dan (Lindsey) Rokusek, of Rapid City, SD, Katie (Chad) Carlson of Aberdeen , SD , Allison (Sean) Fedt of Lincoln, NE and Amanda Forrest of Roswell, NM. Great grandchildren, Emily, Abby and Avery Olson, Alivia and Aiden Rousek, Cade and Sarah Carlson and Quinn and Harmon Fedt. Also surviving Donna is her sister, Carol (Dick) Chilson of Albuquerque , NM  sisters in law, Mary Sternhagen of Highmore, SD, Rosalie Orth of Jupiter, FL and Cheryl Kleppin of Wessington Springs, SD, and brother in law Elroy Phillip (Jeanette) Orth of Sioux City, Iowa.  She was preceded in death by her parents, her husbands, Emil and Gary and her brother, William Sternhagen Jr.
To order memorial trees or send flowers to the family in memory of Donna Bell, please visit our flower store.