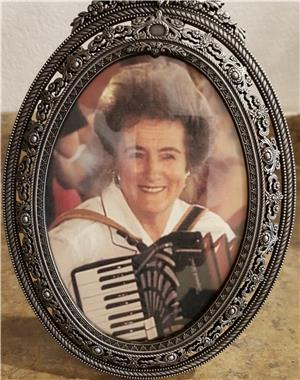 Doris Marie Svendsen was born June 28th, 1930 near Olivet, SD to Solomon and Olive (Schmiedt) Grosz. She was baptized at Hoffningsthal Lutheran Church July 20th, 1930.
Her parents farmed near Olivet, SD and at age eleven the family moved to Sacramento, CA where most of her mother's family lived. Fear of living in Sacramento because of the war with Japan persuaded them to move back to South Dakota, near Yankton, in the spring of 1945.
On June 28th, 1948 Doris married Earl Svendsen at Trinity Lutheran Church in Yankton, SD. In 1950 they started farming in the Volin area. Their son Randy was born in 1956.
Doris worked for Sacred Heart Hospital as a secretary on the medical floor for many years. She also worked at the Sister James Nursing Home in the activities department where she played countless hours on the piano and accordion entertaining the residents.
Doris loved music and also played organ, acoustic and electric guitar. She was a soloist for over 85 funerals and weddings. She sang in the Vangen Lutheran Church Choir and also taught Sunday school there.
After her husband, Earl, passed away in 1985 she became very active in a farming partnership with her son, Randy, for the next 30 years. She particularly enjoyed driving the trucks and tractors with being proud of only one mishap of colliding with a bridge with a piece of farm equipment in those 30 years. The neighbors also liked to joke that Doris could plant a straighter row of corn than Randy.
Love of her family, son Randy and his wife Valerie and grandsons Nikolas and Corey, was most important in her life.
Surviving are son Randy (Valerie) Svendsen; grandsons Nikolas Svendsen and his girlfriend Meagan Dion and Corey Svendsen; sister Carolyn (Melvin) Barington; and her much loved nieces and nephews: Linda, Pam, Cyndi, Laura, Beth, Marilyn, Robin, Dave, Dan, Mike, Marty, James, Steven, Leland, Tad, Gary, Brian, Mark, and their spouses.
Preceding her in death are her husband Earl Svendsen, brother Raymond Grosz and his wife Lou Grosz, parents Solomon and Olive Grosz, grandparents John and Anna Grosz, grandparents Julius and Maria Schmiedt, and nephew Jonathan Grosz.
To order memorial trees or send flowers to the family in memory of Doris Svendsen, please visit our flower store.