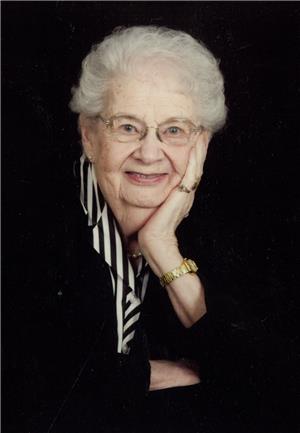 George and Esther Boudler gave birth to Doris Wieczorek in 1920 in Jeddo, PA. Doris and her family moved to Canton, Ohio when she was in the first grade.
Doris met William Wieczorek at the Assembly of God church in Ohio, which was where William’s uncle was the pastor. William was originally from the Mount Vernon, SD area, but was encouraged to go to Ohio by his uncle in the Dirty 30s since crops were not looking good. William worked at Timkin Rollerbearing Co. until he was laid off 3 months after they were married in Ohio in 1937. Because Doris was pregnant with their first child they moved in with Doris’ parents where a daughter was born at home in 1938. Bill then was a mechanic for a private business. They lived in an apartment until they built their new home two blocks from her parents in Canton.
In 1943 Doris and Bill moved to Mt. Vernon, SD. Bill wanted to go back to the farm. He drove a cattle truck and they lived there for a winter. They moved to Chamberlain in 1944 where they first rented a farm. Becoming a farmer’s wife from a city girl was a rude awakening for her. Soon she was planting a huge garden, canning vegetables, cleaning wild game, and raising chickens after they bought a farm south of Chamberlain. Twins were born in 1945 and later a son, in 1952. They lived there until Bill’s death April 2, 1956. Doris packed up the family, sold the farm and moved to town. She did not work for a couple of years since the youngest son was only 4 years old. She then began working in the kitchen at what was Sunset Valley Nursing Home for a year where she helped prepare the evening meal. That was followed by five years at Chamberlain’s Bower’s Bakery where she waited on customers and baked cookies and sometimes had to quickly decorate a birthday cake the owner had forgotten to decorate. She then completed 15 years at the Chamberlain Public Schools kitchen where her main job was to make the desserts before helping with the rest of the meal. The years she worked there all the food was prepared from scratch. Much of one year was a real challenge because it was spent  cooking out of the tiny armory kitchen next to the school because the kitchen in the Egleston building had been condemned and needed repair before students and staff were allowed to return.
She cared for her mother in her home for a year until Feb. 1980 when her mother passed away. She retired from her school position at the end of the school year in 1980. She enjoyed traveling with friends – going to Hawaii, England and Ireland, a California bus tour, a New Orleans bus tour, and a St. Lawrence waterways cruise into New York.
She was a wonderful cook, had sewing skills good enough to make clothing, from children’s coats made out of discarded adult coats, to dresses. She taught herself to crochet and knit, completing many beautiful things. She and a couple of friends gathered to help each other out. From there she went on to make many things, including a matching dress and sweater for a granddaughter, baby clothes, afghans, and many Barbie doll outfits. She was always called upon to do a lot of mending, a job now passed on to her younger daughter. She was full of patience, forgiveness, and love for her family.
Doris passed away on Monday, January 21, 2019 at Avera Sister James Care Center in Yankton, SD at the age of 98 years, 7 months, and 16 days.
She was preceded in death by her husband, William C. Wieczorek; her son, Daniel Wieczorek; her parents; her two brothers and their wives; and son-in-law, Glenn Frame.
She is survived by children Judy Frame, Missoula, MT; Janet (Duane) Stevenson, Yankton, SD; Gene Wieczorek, Ft. Pierre, SD; daughter-in-law Marles Wieczorek, Whapeton, ND; and daughter-in-law Laurene Wieczorek, Pierre, SD; as well as grandchildren Kelly (Doug) Budig, Yankton, SD; Alisa (Tarri) Rott, Sioux Falls, SD; Tammy (Scot) Bonde and Kathy (Chris) Jensen, Spearfish, SD; Louisa (Tim) Dion, Hutchinson, MN; Wade (Marilyn) Frame, Polson, MT; and Boyd (Shelly) Frame, St. Ignatius, MT; and several great grandchildren and great-great grandchildren.
To order memorial trees or send flowers to the family in memory of Doris M. Wieczorek, please visit our flower store.