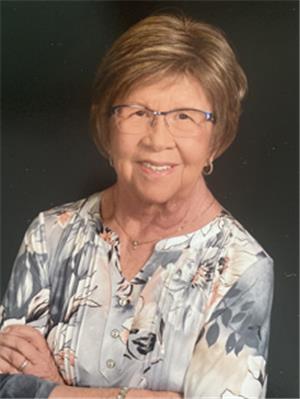 Dorothy Bietz, age 74 of Scotland, passed away Monday, February 15, 2021 at Landmann-Jungman Memorial Hospital in Scotland.
Dorothy Diane Thum was born to Elton "Shorty" and Charlotte (Muehlbeier) Thum on December 7,1946, at the Scotland Clinic. She was baptized and confirmed in the Scotland Congregational Church. Dorothy went to eight years of country school, graduated from Scotland High School in 1964 and Southern State Teachers College in 1967. She taught one year in Rock Rapids, lowa, and eight years in Menno. She married Dennis Bietz on November 10, 1968. They have two children, Mike and Amy. When Amy was born Dorothy became a stay-at-home mother and farm wife doing whatever was necessary, whenever necessary, including driving the dreaded grain cart.
Dorothy loved music, playing piano and singing, all of her life. Dorothy shared her love of music by co-directing, with Karen Rettedal, the Zion Lutheran Church adult choir for 41 years. Dorothy and Karen also led some of the Sunday school music at Zion for over 25 years. Dorothy and Karen spent many fun hours listening to and choosing music that the choir would like. She strove to use her musical gifts to make worship enjoyable and spiritually rewarding for the entire congregation. Dorothy loved serving at church and helping wherever she was needed. She enjoyed bowling and golfing, playing in various leagues and making lots of friends along the way. She was a substitute teacher for many years, and after moving from the farm to Scotland in 2016, spent many enjoyable hours volunteering at the Youth Center.
Dorothy and Dennis loved traveling with their friends to Europe, Canada, and around the country, making great memories along the way. She adored her grandchildren, and loved watching them in their activities and planning visits with them. Her desire to spend moments with her family, especially her precious grandchildren, was stronger than the discomfort of two years of chemo, radiation, tests, and procedures.
On February 1, 2021, Dorothy asked her doctor when she could hug people again after getting her second covid shot the next day. She was told two weeks and Dorothy went home and circled February 16 on her calendar. Little did we know that she would be hugging Jesus on February 15. Dorothy's loving, kind personality which always put others first came to light this past week as doctors, nurses, family, and friends were able to tell Dorothy and her family how much her kindness meant to them.
Dorothy is survived by her husband Dennis; son Mike (Stephanie) Bietz, Pierre and their children Annaliese, Emersen, and Polly; daughter Amy (Tim) Bartlett, Lee's Summit, MO and son Nate; sister Rita (Don) Baker, and brother Dennis (Ellen) Thum. She is also survived by father-in-law Eugene Bietz; sister-in-law Donna (Ron) Nelson; aunt Viola Popma; uncle and aunt Lester and Shirley Muehlbeier, and by numerous nieces, nephews and cousins.
Cancer may have taken Dorothy's body but it did not take her mind, her spirit, or her soul. Her standard response when asked how she was doing was "I'm fine" or "I'll be fine" and now she is truly fine in God's embrace.

To order memorial trees or send flowers to the family in memory of Dorothy Diane Bietz, please visit our flower store.
Open