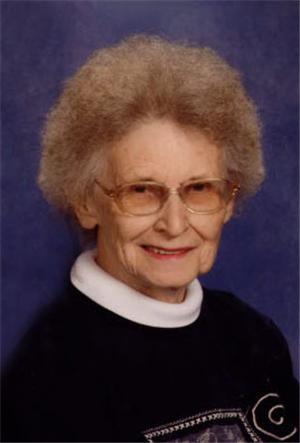 CELEBRANT
Fr. Joe Forcelle
MUSIC
Organist ~ Colette Stratman
Congregational Hymns
“Amazing Grace”
“Those Who See Light Can Walk in Dark”
“Angels Among Us”
“How Great Thou Art”
LECTORS
Brandon Carda & Ross Carda
GIFT BEARERS
Melissa Carda, Jessica Carda, & Danielle Tycz
ALTAR SERVERS
Zach & Camille Sykora
CASKETBEARERS
Brandon Carda
Ross Carda
Tyler Tycz
Sarah Carda
Jenny Carda
Danielle Tycz
Brittany Tycz
Christina Martinez
Dorothy Mae Carda was born on January 11, 1928 to Charles and Mamie (Rothschadl) Kriz on the family farm in Tyndall, South Dakota. She attended Stekly rural school through the 8th grade. At the age of 16, she went to work at Tubby Reidinger Café until her marriage. On July 14, 1946, Dorothy was united in marriage to Ray Carda at St. Leo’s Catholic Church in Tyndall.
For a time, Ray owned and operated a pool hall in Avon and a bar named “The Past Time” in Wagner until he began farming north of Tyndall. Dorothy was known for raising and selling boiler chickens and ducklings while on the farm and also worked at Groveland Park for the Beringers. Following Ray’s retirement from farming in 1972, they moved into Tyndall where she started to work at Coast to Coast for Milo and Rose Novak. In 1975, Ray and Dorothy moved to Avon where he opened a bar for one year. Upon moving back to Tyndall, she worked at several different local eateries, including LnR’s Café for Woodrow and Audrew Kelley, Kelley’s Catering, Kelley’s Pizza, Kelley’s Café and Pub for Clark and Kris Kelley, the Corner Bar for Del and Brenda Dockendorf, and Gibby’s for Brad and Michele Gibson. She also cooked for the Bon Homme County jail for several years.
Dorothy loved dancing and listening to polka music. Throughout her life, she loved cooking and the friendly company her meals gathered. She also enjoyed tending her houseplants and a good game of pinochle.
Dorothy died on Saturday, January 31, 2015 at St. Michael’s Hospital in Tyndall having attained the age of 87 years and 20 days.
She is survived and remembered by her four children: Dennis Carda of Tabor, Jerry (Diane) Carda of Lead, Jeff (Lisa) Carda of Crofton, NE, and Cindy (Dennis) Tycz of Tyndall; ten grandchildren; three great-grandchildren; and one sister Mary Hajek of Tyndall.
She was preceded in death by her husband of 67 years, Ray in 2014, her parents, Charles and Mamie Kriz, her daughter Katherine in infancy, and two brothers: Joseph Kriz at birth and Eugene Kriz.
To order memorial trees or send flowers to the family in memory of Dorothy Mae Carda, please visit our flower store.