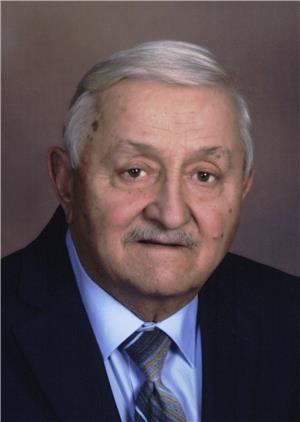 Duane Rothschadl was born Sunday, September 20, 1936 to James and Celia (Kriz) Rothschadl on the family farm north of Tyndall. He attended Hoff country school district #80, graduating from eighth grade. Not long after, Duane ventured out on his own, living and working near Lesterville as a farmhand and later hauling grain near Scotland

Around age 17 he experienced “love at first sight” at a Dante dance. The next evening was their first date and the start of a lifetime together encompassing over six decades. Duane married the love of his life, Joan Pravecek, April 16, 1958 at St. George Catholic Church in Scotland. They moved onto a farm north of Tyndall where they would spend the next 53 years raising a family and growing their farm business.

Throughout his life Duane enjoyed the outdoors, fishing in all seasons and an excellent shot when hunting. He was a league bowler for 30+ years. In the 1980s Ford Motor Company featured him in a regional print ad alongside his pickup with the headline quote, “I’ve been a Ford man all my life.” His vehicle brand loyalty carried forward into 2020. A faithful member of St. Leo Catholic Church, he served as financial guardian for 25+ years.
After moving to Tyndall in 2011, Duane’s love of the farm never wavered. At 84, he continued to help his son and grandson run the family ag business. He was a proud grandpa and great-grandpa. He deeply valued his golden years with Joan; going on date nights, completing crossword puzzles together, and enjoying the company of friends and family. Kind, funny, hardworking, and introspective were some of his most endearing qualities.

To order memorial trees or send flowers to the family in memory of Duane Rothschadl, please visit our flower store.
Open