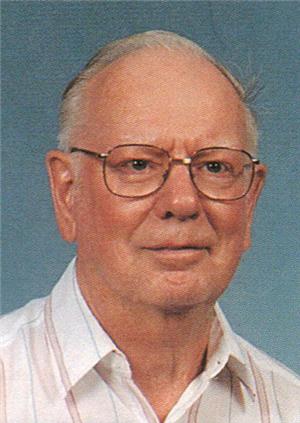 CLERGY
Rev. Tom Petersen
MUSIC
Organist ~ Glee Deutscher
Congregational Hymns
“Amazing Grace  ”
“Just As I Am”
“How Great Thou Art”
HONORARY CASKETBEARERS
Glen Baker
Curtis Johnson
Craig Lafollette
All his business friends
and associates.
ACTIVE CASKETBEARERS
Wayne Grace, Jr.
Donald Schmidt
Marvin Thum
Jim Sedlacek
Vern Haase
Frank Behl
Edgar “Ted” Grace was born on Sunday, October 23, 1927 to Harold and Lillian (McCarthy) Grace in Highmore, Hyde County, South Dakota. In 1946, he graduated Scotland High School and opened his own television and electronics store. Ted started his store by repairing radios then televisions and served as the town’s electronic specialist for over 50 years. He was an active supporter of the community of Scotland, being a member of the Historical Society, Rotary Club, Chamber of Commerce and volunteer at all veteran events, the Scotland Rodeo, and many more. If a sound system was needed for a Scotland function, Ted immediately volunteered his time and equipment. His hard work and dedication to the community was formally recognized on April 20, 1990 by Governor George Mikkelson who declared April 20 as “Ted Grace Day in Scotland” and a large town celebration was held in his honor. Ted was always ready to spend time with friends, unless his night was already taken by a Scotland baseball game where he provided the sound system. He was a member of the United Methodist Church in Scotland and served as an usher for many years. Ted died on Monday, September 8, 2014 at the Good Samaritan Society of Scotland having attained the age of 86 years, 10 months, and 16 days.
He is survived by his sister, Marilyn Matthews of Houston, Texas; three nephews: Wayne (Linda) Grace of Black Hawk, SD, James (Carry) Grace of Houston, TX, and Jim Matthews of Houston, TX; two nieces: Barbara Matthews of Houston, TX and Mary Matthews of Greeley, CO; great-nieces and nephews; special friends: Don Schmidt and Marvin and Agnes Thum; and his many friends.
He is preceded in death by his parents, Harold and Lillian Grace, his brother, Wayne Grace, and his beloved dog, Jojo
To order memorial trees or send flowers to the family in memory of Edgar "Ted"  Grace, please visit our flower store.