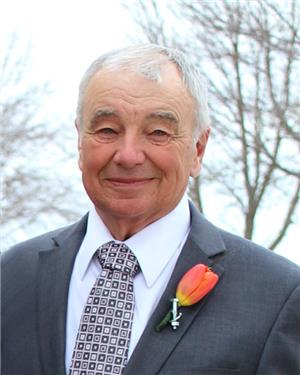 Edmund Julius Bauder was born on August 7, 1949 to Julius and Edna (Kaul) Bauder at Scotland, South Dakota. He was baptized on November 30, 1949 and later confirmed on April 26, 1964. Following his graduation from Scotland High School in 1967, Edmund completed the auto mechanics course at Universal Trade School in Omaha, Nebraska. Upon returning to the area, he worked for a time in various auto body and auto mechanic shops. Edmund was united in marriage to Mary Jo Varilek on August 22, 1970 in St. Paul, Minnesota. For a year and a half, they made their home in the Twin Cities while he worked as a mechanic for White Bear Dodge, proudly proclaimed by Edmund as the largest Dodge dealer in the US. In 1972, they returned to the Scotland area and began farming. In 1974, they moved to Edmund’s family’s homestead to live and farm. Edmund was a busy farmer who tried his hand at every task. He had a passion for raising hogs, and for many years raised them from farrow to finish. He also raised cattle while tending his fields of corn, soybeans, and hay. Edmund could make a pet of any animal and especially enjoyed his large herd of farm cats that he loved and cared for.
Edmund was a jack of all trades who was passionate about his work. He always went about his business whistling, and always had the radio on, tuned to his favorite classic rock station. Edmund was an independent-minded, self-sufficient, and determined man. He had the skills and drive to fix and do anything that needed tending to on his own. He was dedicated and devoted to his family and farm, often giving that same devotion to others in many forms of assistance, putting their needs before his own. He was an avid Mopar collector and fan, and had an amazing knack for spotting and identifying a classic car anywhere he went. In his spare time, he enjoyed restoring toy tractors, tinkering with anything and everything, and spending time spoiling his grandchildren. He especially enjoyed visiting with friends, neighbors, and relatives, sometimes for hours on end. Edmund took a very humbled pride in all of his accomplishments, including the family he and Mary Jo had raised and cared for. His latest and greatest passion was visiting with his grandchildren on a daily basis, sometimes multiple times per day. Edmund was a member of Zion Lutheran Church in Scotland and served as an usher there for many years.
Edmund unexpectedly passed away of natural causes at his farm on Wednesday, February 20, 2019 having attained the age of 69 years, 6 months, and 13 days.
He is survived and remembered by his wife of 48 years, Mary Jo Bauder of rural Tyndall, SD; sons: Jay (Andrea) Bauder of New Richmond, WI and Sean (Sara) Bauder of rural Tyndall, SD; grandchildren: Adeline, August, and Everett Bauder; and many cousins, nieces, nephews, and friends. He was preceded in death by his parents, Julius and Edna Bauder, and his father and mother in-law, Joe and Lillian Varilek.
To order memorial trees or send flowers to the family in memory of Edmund Bauder, please visit our flower store.