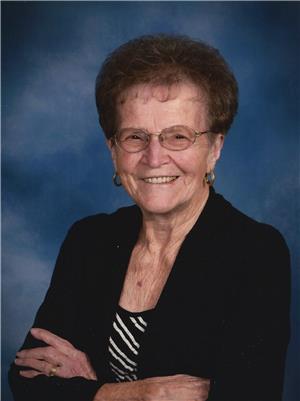 Ella (Suess) Bertrand was born March 7, 1928 on the family farm near Scotland, South Dakota. She was the thirteenth of fourteen children born to George and Magdalena (Heihn) Suess. Ella was baptized at Ebenezer Reformed Church in Scotland. Ella attended country school through the 8th grade. She then attended and graduated class of 1945 from Scotland High School. Ella continued her education at beauty school in Sioux City. After school she returned to Scotland and worked at the telephone office as a switch board operator until she met the first and only love of her life. Ella was united in marriage to H.R. “Bud” Bertrand on May 25, 1953 at St. Wenceslaus in Tabor. Together they made their home in Tabor until moving to Scotland in January of 1968 where she babysat for 40 years.
She enjoyed camping, ironing, crocheting, and playing cards. She had a green thumb with beautiful flowers and plants both inside and outside. If the television was ever on she was watching Danny O’Donnell, Fun Time Polka, or Wheel of Fortune. Ella loved more than anything spending time with family and friends.
She was a member of the St. George Catholic Church and St. George Altor Society.
Ella passed away on Monday, August 12, 2019 at her home in Scotland, having attained the age of 91 years.
Ella’s memory will be cherished by her children, Ray (Dee) Bertrand, Yankton; LuAnn (John) Geiman, Scotland; Brian (Renda) Bertrand, Gayville; 17 grandchildren; 28 great-grandchildren; one twin brother: Al Suess of Sioux Falls; one sister: Elda Juhnke of Columbus; and numerous nieces and nephews.
In addition to her parents, Ella was preceded in death by her husband, H.R. “Bud” Bertrand; son, Joe Bertrand; two grandchildren; two great-grandchildren; eight brothers: Hugo, Ruben, Arthur, Emil, Alvin, Harold, Edmund, and Loren; and three sisters: Martha, Clara, and Esther.
This obituary was written in loving memory by the family.

To order memorial trees or send flowers to the family in memory of Ella  Bertrand, please visit our flower store.
Open