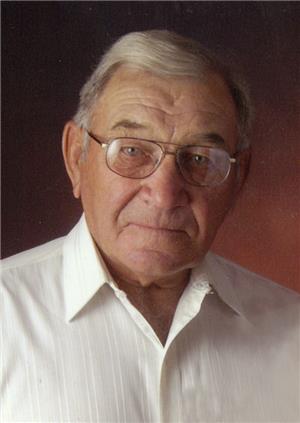 OFFICIATING
Lorney VanGerpen
MUSIC
Soloist ~ Tammy Varilek
“Daddy’s Hands”
HONORARY CASKETBEARERS
Elmer’s Grandchildren & Great-Grandchildren
ACTIVE CASKETBEARERS
Roger Svanda
Gary Dvoracek
Warren Svanda
Dan Varilek
Ken Herman
Tim Hovorka
Memorials can be directed to Tyndall Good Samaritan Center and Compassionate Care.
Elmer William Svanda was born April 30, 1925 to Joseph J. and Anna (Vavruska) Svanda at rural Tyndall, South Dakota. He graduated from Tyndall High School in 1942. Elmer’s journey of serving his country began when he was called to duty June 5, 1944 with the United States Navy. He was aboard the USS Baltimore and was in the communications department and worked occasionally in the post office. Seaman First Class Elmer Svanda was honorably discharged May 25, 1946. He served during time of World War II.
Elmer and Annabelle (Sip) were united in marriage April 19, 1949 at the United Methodist Church in Tyndall. At the beginning of their married life, Elmer and Annabelle made their home on a farm southeast of Tyndall for a short time until they purchased a farm acreage west of Tyndall in the early 1950s. The couple raised hogs, cattle, chickens and ducks and farmed numerous acres of grain. Up until the age of 89, he was still active in farming. Elmer was proud of his Czech heritage and was an avid polka dancer at the many polka fests he and Annabelle attended. He was a member of the Tyndall Presbyterian Church where he was a past elder, Czech Heritage Preservation Society, Pike-Wagner American Legion Post, Simek-Ptak VFW Post, Dakota Southern Cattlemen’s Association and WLFA Lodge. Elmer loved to hunt and made many trips West River for deer and turkey hunting and a trip to Wyoming for elk hunting as well as hunting in Bon Homme County. He was one of many WWII veterans who boarded the Honor Flight to Washington DC in August 2010 to view the new World War II memorial. After Annabelle’s death in December 2013, Elmer remained on the farm until June of 2014 when he entered the Good Samaritan Society, Tyndall.
Elmer died November 6, 2016 at the Good Samaritan Society, Tyndall at the age of 91 years.
Elmer is survived by his three daughters, Nancy (Tom) Logue of Tyndall, Pat (Dave) DeGroot of Tripp and Becky (David) Tycz of Tyndall; eight grandchildren, Kelli (Jon) Sternhagen, Amy (Chad) Martin, Dawn (Mike) Stoebner, Dean (Tammy) Varilek, Debra (Barry) Schmidt, Sara (Justin) Lammer, David Tycz Jr. and Emily Tycz; 12 great-grandchildren and one sister-in-law, Arlene Svanda of Tyndall.
He was greeted into Heaven by his wife, Annabelle, of 64 years; parents and parents-in-law, Joseph J. and Anna Svanda and Edward and Mamie Sip; a brother, Wilbur Svanda; a sister and brother-in-law, Irene and Emil W. Herman and two sons-in-law, Butch Rothschadl and Chuck Bame.

To order memorial trees or send flowers to the family in memory of Elmer Svanda, please visit our flower store.