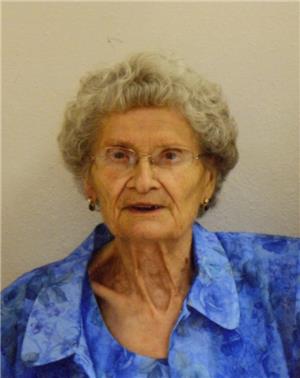 Elsie (Mares) Waller was born on January 29, 1926 in Avon, South Dakota to Joseph and Frances (Ober) Mares. She grew up on farms located south of Dante and later northeast of Wagner. She married Carl Waller in Wagner on July 18th, 1953. To this union, two daughters were born, Linda and Leann. Elsie held various jobs throughout her life, including working at Cimpl's, Dale Electronics, and Gurney's. Carl and Elsie moved into Tyndall in 1977.
Elsie was a lady of many talents. Her green thumb was impressive; there was a large garden planted every year and flowers all over the house. She will be remembered for her sewing and rug making skills. Many babies were blessed with her quilts upon being baptized at St. John's Lutheran Church, and her loom rugs are still enjoyed by many. Elsie was always baking or canning something; a skill she passed to her daughters and granddaughter. The grandkids and great-grandkids could always count on fresh kolaches, long johns, or cookies when they stopped at Grandma’s.
Elsie was an active member of the Pike-Wagner American Legion Post #2 Auxiliary, St. John Lutheran Church in Tyndall, and the Lutheran Women’s Missionary League (LWML). She was a quiet, yet strong woman who also enjoyed laughter. Elsie was and is a loving, kind, and faithful Christian mother, grandmother, and great-grandmother.
Elsie passed away on Friday, November 17th, 2017 at the Good Samaritan Society in Tyndall at the age of 91 years, 9 months, 19 days.
Elsie is survived by her daughters, Linda (Jerry) Pesek of Tyndall and Leann Waller of Dickinson, North Dakota; five grandchildren: Jennifer (Mike) Mudder and their sons, Easton and Cooper, of Tyndall, Kelly (Nancy) Gukeisen and their daughters, Allison and Kaitlyn, of Mitchell, Jerrod Pesek and daughter, Chloe, of Casper, Wyoming, Justin (Misty) Gukeisen and their daughter, Madison, of Yankton, and Josh (Megan) Pesek and their son, Ramsey, of Tyndall.
Elsie was preceded in death by her husband, Carl in 2003, her parents Joseph and Frances Mares, and her brother-in-law Nels Johnson.
To God be the Glory.
To order memorial trees or send flowers to the family in memory of Elsie Waller, please visit our flower store.