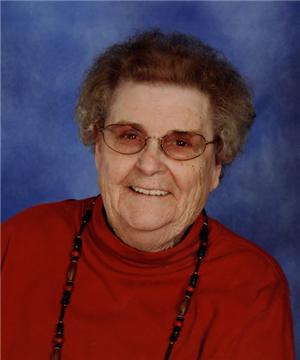 CLERGY
Rev. Jonathan Vehar
MUSIC
Organist ~ Dorothy Bietz
Congregational Hymns
“Softly and Tenderly Jesus is Calling”
“Just a Closer Walk With Thee”
“Precious Lord, Take My Hand”
Zion Choir ~ “What a Friend We Have in Jesus”
CASKETBEARERS
Clinton Jerke
Randolph Jerke
Rudolph Jerke
Verlyn Jerke
Melvin Kepplinger
Glenn Ziegler
Erna Christina Jerke was born on Tuesday, September 30, 1924, on a farm southwest of Kaylor, South Dakota. She was the youngest child of Henry and Christina (Geiszler) Jerke. She was baptized on October 19, 1924 at the Posthal Lutheran Church by Rev. Koeppel and confirmed on May 12, 1940 at Zion Lutheran Church, Scotland, by Rev. Em Fuchs. Erna attended and graduated from the Geishirt School which was southwest from the homeplace. Her teen years were spent at home where she helped her parents with the farm and house work.
On September 30, 1945, Erna married Edwin Eltor Ziegler at the Emanual Lutheran Church in Kaylor, South Dakota. They then lived and operated the Ziegler Homestead Farm northwest of Kaylor until 1980. At that time, they started and operated a grocery store in Kaylor until 1991, when they closed it and fully retired to their home in Kaylor. Erna and Edwin were blessed with five daughters: Charlene, LouAnn, Cheryl, Ellen and Lisa.
During her life, Erna kept busy caring for her children and helping her husband with the farm work and at the store. In her spare time, she enjoyed crocheting, quilting and visiting with friends (especially coffee time in Kaylor.) Prior to her marriage, Erna was a member of Emanuel Lutheran Church in Kaylor where she taught Sunday school. After her marriage, she was a member of the Dennewitz Lutheran Church until it closed and they again became members of Emanuel Lutheran in Kaylor. In 1970, they joined Zion Lutheran Church in Scotland. There Erna sang in the choir for many years, helped with quilting and was also active in the women’s organization.
Due to Edwin’s ill health, they moved to Luther Manor in Sioux Falls, South Dakota in December of 2005. Upon Edwin’s death in February of 2007, Erna became a permanent resident of the Good Samaritan Home in Scotland. Erna passed away on Thursday, February 28, 2013 at the Good Samaritan Village in Sioux Falls, having attained the age of 88 years, 4 months and 29 days.
Erna is survived by her five daughters: Charlene Ziegler of Simpsonville, Kentucky, LouAnn Ziegler, Cheryl Ziegler, Ellen Smook and Lisa (Jeff) Ducheneaux, all of Sioux Falls; two granddaughters: Evelynn and Madelyn Ducheneaux; a brother, Richard (Lula) Jerke and a sister-in-law, Velda Jerke, all of Parkston.
She was preceded in death by her husband, Edwin, on February 26, 2007; a son in infancy; her parents; six brothers: Alfred (Lorinda), Arthur (Viola), Bernhard (Anna), Hugo (Ella), Eugene (Violet), and Emil; one sister, Frieda (Bernard) Grosz; and son-in-law, Thomas Smook.
To order memorial trees or send flowers to the family in memory of Erna Christina Ziegler, please visit our flower store.