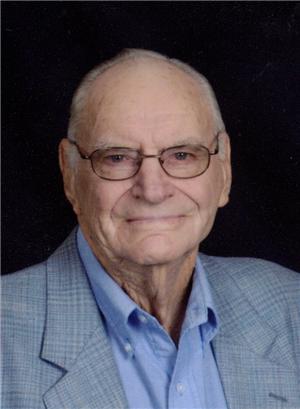 CLERGY
Rev. Tom Petersen
MUSIC
Pianist ~ Linda Kronaizl
“Press On” by Heidi Sayler
Congregational Hymns
“Amazing Grace”
“Because He Lives”
“Beyond the Moon”
CASKETBEARERS
Brian Herrboldt
Austin Herrboldt
Ajay Herrboldt
Brian Sayler
Garrett Sayler
Heath Hisek
Mark Hodgen
Aden Hodgen
Eugene Vern Wright went home to be with the Lord on October 9, 2012 at the age of 90 years, 4 months and 7 days. He was born on June 2, 1922 to Lathiel and Florence (Ellinger) Wright. Gene attended Odessa and Scotland schools and worked with his father on the family farm. On December 19, 1948, he married Metha Weisz at St. John’s Lutheran Church in Kaylor, South Dakota. To this union, three children were born. Together they farmed southeast of Scotland and in 1958 they moved off the farm to Kaylor where they went into business for three years. In 1963, Gene suffered a severe stroke at the age of 41; he fought hard and with much help from Metha, recovered the use of his right side and speech. After his stroke, he worked various jobs such as Constable in Kaylor, running the road maintainer, hauling water, hauling seed corn, and raising sheep. He will best be remembered for running the concession stand at the Kaylor ball field and hauling sheep in his little Ford Bronco. The things he loved to do included playing cards, working in the yard, having coffee time with his friends in Kaylor, playing marbles with his grandchildren and taking trips to the Black Hills with family. Gene always had an easy smile, a quick tease and a hello for all those he encountered. He was also a faithful member of the United Methodist Church in Scotland.
He will be greatly missed by his wife, Metha; a daughter, Cindy (Brian) Herrboldt of Menno; six grandchildren: Heidi (Brian) Sayler of Sibley, Iowa, Melissa (Heath) Hisek of Richfield, Minnesota, Nicole (Mark) Hodgen of Harrisburg, and Austin Herrboldt, Abby Herrboldt and Ajay Herrboldt, all of Menno; seven great-grandchildren: Garrett, Madeline, Grace, Levi, and Elijiah Sayler, Sofia Hisek, and Aden Hodgen; two brothers-in-law: Floyd (Edith) Weisz and Eugene Herrboldt; and numerous nieces and nephews.
He was preceded in death by his parents; a stepmother, Christine; his son, Gary, in 1997; a daughter, Denise, in infancy; a grandson, Adam Herrboldt; a sister, Laureen Herrboldt; and two brothers, Glenn Wright and Kenneth Wright.
To order memorial trees or send flowers to the family in memory of Eugene Vern  Wright, please visit our flower store.