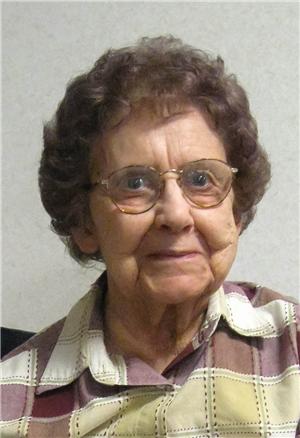 CELEBRANT
Fr. Mathew Vazhappilly
MUSIC
Organist ~ Georgianne Pravecek
Congregational Hymns
Processional ~ “How Great Thou Art”
Offertory Hymn ~ “Be Not Afraid”
Communion Hymn ~ “In the Garden”
Song of Farewell ~ “O Loving God”
Recessional ~ “On Eagle’s Wings”
HONORARY CASKETBEARERS
Dennis Ded
Ken Fousek
Rodney Ozanne
Jim Tucek
Zack Waldner
CASKETBEARERS
David Kvasnicka
Jason Sedlacek
Joe Sedlacek, Jr.
John Soukup
Paul Soukup
Ron Wagner
Evelyn Amelia (Wagner) Kvasnicka was born January 18, 1917, to Maurice and Amelia (Skorepa) Wagner on the Wagner Homestead south of Lesterville. In the spring of 1919, her family moved to their new farm one mile northeast of Tyndall. Evelyn attended rural school and graduated from Tyndall High School in 1935. Evelyn married Frank P. Kvasnicka, Jr. on June 26, 1939. Frank and Evelyn farmed the Kvasnicka family farm south of Tripp raising their three children – Charles, Eugene and Elaine. Evelyn was devoted to her children and was very proud of them. Frank and Evelyn retired from farming in the early 70’s. They remained on the family farm until the fall of 1997. They then lived in the Lidi Apartments in Tyndall until October 2003. Frank & Evelyn moved to Sister James Care Center in Yankton. Frank passed away in June 2009. Evelyn received excellent, loving, care and friendship from the wonderful staff of Majestic Bluffs right up until the time of her death.
Evelyn was a life member of Sts. Cyril and Methodius Catholic Church in Vodnany where she was a member of the Vodnany Altar Society. Evelyn loved being a farm wife and worked hard on the Kvasnicka family farm. Evelyn was always quick to offer friends and neighbors a helping hand or offer homemade food when they were in need. She loved raising ducks, geese, chickens and turkeys and many became pets. Evelyn’s many hobbies included sewing, embroidering, crocheting, and quilting. Evelyn loved gardening and then canning what she raised for the winter. Her love of flowers was evident with all the blooming flowers around their home. From the age of 14 years, Evelyn always had geraniums blooming year around inside and outside her home until her death. Cooking and baking was another of Evelyn’s many excellent talents. Family and friends were privileged to enjoy her made from scratch wonderful meals. Whenever anyone stopped in, they were always treated to a meal or a “lunch.”  Evelyn was noted for her excellent baking but most of all for her Kolaches and cinnamon rolls. Her children and grandchildren will always cherish those memories of all the freshly baked rolls she made especially for them. Evelyn loved and enjoyed her grandchildren along with her “additional grandchildren,” the Sedlaceks. All her grandchildren have wonderful memories of the times spent on the farm with their grandparents, experiencing new adventures and fun things to do. Evelyn loved to write letters to keep in touch with her family and friends right up until the end with cards, letters, and gifts for birthdays, Christmas and special events. As a resident of Sister James, Evelyn enjoyed the many friendships she made and the many activities of crafts, baking, sharing her recipes, playing cards and most of all “bingo.”
Favorite pastimes of Frank and Evelyn were frequent trips to “The Hill,” Ft. Randall Casino, where they made new friends and visited with their friends and neighbors while there. Evelyn and Frank enjoyed many trips with Eugene through the years touring South Dakota, Wyoming, Nebraska, Minnesota, and Iowa. They also enjoyed traveling to many states and sight-seeing as they visited with their son, Charlie, and his family in Pocatello, ID and their daughter, Elaine, and her family in Chicago, IL, Jackson, MI, and Winona, MN. Unfortunately they were unable to visit the Southwest where Elaine now lives. Evelyn passed on quietly and peacefully and into the arms of Our Heavenly Father surrounded by her family and friends that went before her on Tuesday, March 26, 2013 at Majestic Bluffs in Yankton at the age of 96. Evelyn is at peace now and forever.
Eternally blessed for sharing her life with her love and memories are her children:  Eugene F. Kvasnicka and Mary Kay Rokusek, both of Yankton and Elaine (Patrick) Soukup of Gilbert, Arizona; her four grandchildren: John (Amy) Soukup of Peoria, Arizona, Paul Soukup of Winona, Minnesota, David Kvasnicka of Pocatello, Idaho, and Laurie (Brett) Struchen of Chubbic, Idaho; two great-grandchildren and one great-great-grandson; her brother, Bernie Wagner of Yankton; a sister-in-law, Lorraine Martz of Wakonda; eight nieces and nephews; and one special feathered friend, “Fred,” also survives Evelyn.
Evelyn was preceded in death by her husband, Frank; her son, Charlie P. Kvasnicka of Pocatello, Idaho in 2002; her parents, Maurice and Amelia Wagner; her brothers, Clarence and Emil; her sister, Lorraine; and one great-great-grandchild. Evelyn was the last survivor of Frank and Evelyn’s lifelong group of close friends.
To order memorial trees or send flowers to the family in memory of Evelyn Amelia Kvasnicka, please visit our flower store.