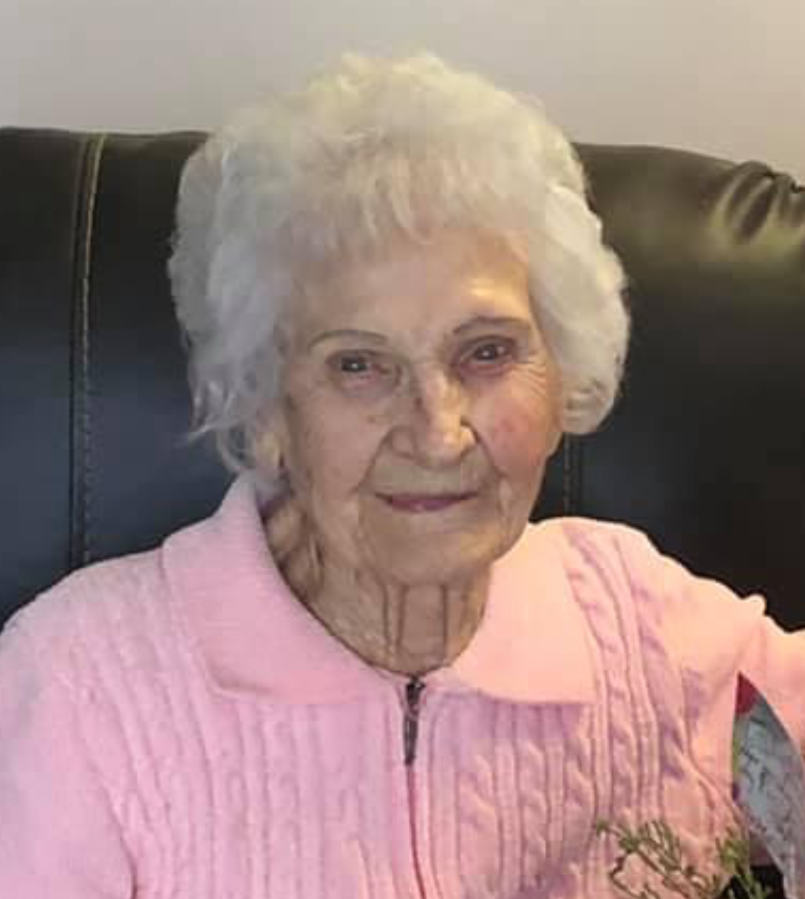 Evelyn Christine Soukup passed away on December 11, 2022 at the Good Samaritan Home of Tyndall, SD. Eve was 104 and two-thirds years old.

A Memorial Mass will be held at 10:30 a.m. Saturday, December 17, 2022 at St. Leo Catholic Church in Tyndall, SD. Visitation will be prior to the funeral, beginning at 9:30 a.m. Interment will take place at a later date, in the St. Leo Catholic Cemetery.

Eve was born on April 23, 1918 near Avon, SD to Joseph and Christine (Merkwan) Sternhagen. She was the second of seven children. She attended country school near the farm and was often driven to school by sleigh or buggy. She would walk in nice weather. She worked hard on the farm with her older brother and other siblings.

Eve met Frank J. Soukup at a dance in Dante, SD and on November 19, 1941 they were united in marriage at St. Mary’s Assumption Catholic Church in Dante. They were the second couple to have their reception and dance at the new Dante Hall. They were blessed with two children, Richard (Dick) and Jacques.

Eve was an enthusiastic, energetic, determined and athletic woman. She as a great cook and superb baker. Eve would make her sons liver and onions, cook Frank’s dreaded wild duck and venison (which none ate) and made his favorite oyster stew every Christmas Eve. Fortunately there were Maus’ homemade wieners for everyone after Midnight Mass.

Eve was a member of the Catholic Order of Foresters for over 60 years, the St. Leo Altar Society for that time, a founding member of the Bon Homme Country Club and member since its beginning. She was taught the game by Lou Chladek. The third hole at the course is dedicated to Frank and Eve. She played her last round of golf at 97 years old. She was an excellent bowler, who taught her sons to bowl at a very early age. Eve could outrun Jacques and Denny Breck around the block.

She was an excellent business woman. As the bookkeeper for Soukup Implement, she was thorough and balanced the accounts to the penny. Eve bought the Tyndall Hotel and after Frank’s retirement they continued to develop it to a thriving residential apartment complex. For many residents, it was a stepping stone to the nursing home. One resident was her mother, who she cared for until the boys’ grandma was well into her nineties.

Eve lived independently until she was 103, driving until almost 102 years old. She taught her son-in-law, Edward how to make dumplings and her son, Jacques how to roast a perfect duck and how to properly bake apples.

To order memorial trees or send flowers to the family in memory of Evelyn Christine Soukup, please visit our flower store.
Open