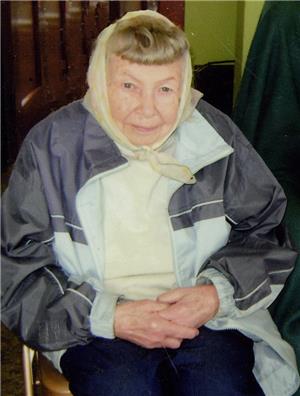 Frances Marie Schaefer was born on a farm southwest of Tripp on January 29th, 1928. She was the eldest daughter of Emmanuel and Elizabeth Schaefer. Another daughter was born about four years later, Frances’s only sister, Geraldine (Brezina).
Frances grew up on the farm and she helped her parents a lot. She attended rural school and enjoyed music, learning how to play piano, organ, guitar, saxophone, and accordion. She graduated from Tripp High School in 1946. Proud of her graduation she still wears her class ring. Frances received her teaching certificate from Southern State Teacher’s College in Springfield. She taught five years at Maag’s School and a few more years at another country school.
Frances moved to town when her parents retired. While living on the farm she enjoyed gardening and raising ducks.
She worked as a waitress at the Lunch Box Café and in the Tripp school lunchroom. She was a member of Emmaus Lutheran Church in Tripp, and served as church organist for many years.  She also provided musical entertainment at the Tripp Good Samaritan for the residents.
Frances came to the Good Samaritan Society-Tripp in December of 2017, and has the distinction of being the last resident admitted to that facility before its closure.
Frances passed away Wednesday, March 28, 2018 at Landmann-Jungman Memorial Hospital Avera in Scotland, South Dakota at the age of 90 years, 1 month, and 27 days.
Frances’s family consists of her sister Geraldine of Tripp; one nephew, Michael Brezina; three nieces: Linda Brezina, Mary (LeRoy) Jerke, Barbara (Russel) Ireland; great-niece Anne (Brent) Thiewes; great-nephews Robert Jerke, Matthew (Amanda) Ireland and their children Sophia, Ava, Aden, and Jonathan (Jordan) Ireland and their children Archer and Adeline.
She was preceded in death by her parents, brother-in-law Emil Brezina, and nephew James Brezina.
To order memorial trees or send flowers to the family in memory of Frances Marie Schaefer, please visit our flower store.