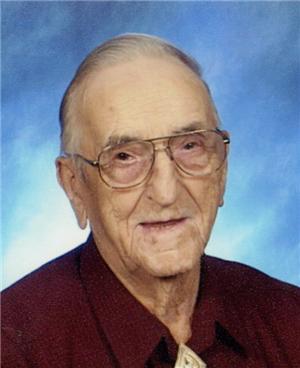 Frank Joseph Bruna, Sr. was born Saturday, May 20, 1916, to Joseph and Frances (Stribal) Bruna in Omaha, Nebraska. He graduated from Wysuph School after which Frank worked on the family farm until he joined the U.S. Army in 1941.  He was in the Army Engineers branch of the military for 4 ½ years and served 3 ½ years in the Pacific near New Guinea, receiving the Combat Insignia.  Frank was extremely proud of his military service and, over the years, entertained his family with many “war” stories. During his time in the military Frank was respected for his mechanical talents and known as a man who could fix anything. Following his discharge from the army Frank returned to farming on the family farm south of Scotland.        On January 8, 1946 he married Esther Sedlacek.  The couple farmed together until they moved to Scotland in 1979.  Frank was very active in agriculture and the promotion of the ag industry.  He was a leading member of the National Farmers’ Organization (NFO) and worked diligently to promote its goals. A big fan of the Scotland City baseball team, Frank never missed a home game. His loyalty was recognized by the team when they honored him with a special sport’s fan plaque. Polka music provided him with many hours of pleasure, whether it was listening to it or playing it on his button accordion or harmonica. In addition to his many talents, Frank was known for the many dozens of perfect oatmeal, peanut butter and chocolate chip cookies he baked and shared by the bagsful with family and friends.  Very involved with his church, Frank served on the St. George Catholic Church Parish Council. He was also an active member of the Scotland American Legion. He was very proud of the organization and proud to have been a member of the Armed Services. Frank passed away on Thursday, June 2, 2011 at the Southridge Health Care Center in Sioux Falls at the age of 95 years and 12 days.
Frank is survived by his son Frank, Jr. (Mary Lou) of Mitchell and a daughter Judy (Larry) Whitmore of Renner; 5 grandchildren: Cathy, Michael, Daniel, Brett and Ben; 8 great-grandchildren; 1 foster great-grandchild; a brother, Charles Bruna; and two sisters, Zdenka Pavlish, and Vlasta Hajek, all of Tyndall.
Preceding him in death were his wife, Esther in 1995; his parents; a brother Joseph Bruna; and sisters Mildred Belohlavek, Libby Belohlavek, and Lillian Soukup.
To order memorial trees or send flowers to the family in memory of Frank Joseph Bruna, Sr., please visit our flower store.