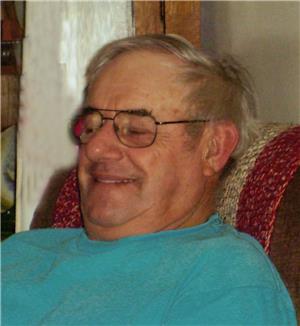 Frank John Konfrst, Jr. was born on March 29, 1939 to Frank John and Elisabeth (Bartunek) Konfrst, Sr. on a farm south of Dante, South Dakota. Due to his mother’s death when Frank was only a 6 month old infant, he lived with various family members throughout his childhood. He attended school through the 8th grade at which time he began farming full time with his uncle.
On June 12, 1960, Frank was united in marriage to Karyn Monfore at the United Methodist Church in Tyndall, South Dakota. Together they made their home on his uncle’s farm north of Avon, South Dakota. In September 1972, Frank suffered an accident with a silage chopper that led to the amputation of one of his legs. The loss of his leg didn’t stop him from continuing to work hard as a farmer. He raised multiple crops, cattle, pigs, and dairy cows. He loved riding his side-by-side and the constant companionship of his black labs, George and Fred.
In the mid-2000s, Frank received an injury to his knee and made the decision to retire from farming. He enjoyed his newfound free time by gardening, fishing, and playing pinochle and marbles. He was also a member of the Masons for over 50 years.
On December 23, 2015, Frank suffered a stroke that required a prolonged stay at Majestic Bluffs Nursing Home in Yankton for rehabilitation. In 2016, he was able to return home to Karyn and they moved into Yankton.
Frank was a quiet man who also had a sense of humor. He loved to tease family and friends and especially enjoyed pushing his wife’s buttons. He was a beloved husband, father, and grandfather.
Frank passed away on Sunday, October 22, 2017 at Avera Sacred Heart Hospital in Yankton having attained the age of 78 years, 6 months, and 23 days.
He is survived and remembered by his wife of 57 years, Karyn Konfrst of Yankton; children: Karla (Duane) Tucker of Yankton, Gene Konfrst of Avon, Eryn (Donnie Joe) Stadler of Kimball, and Frank (Shelley) John Konfrst III of Parkston; 7 granddaughters; and 1 great-granddaughter.
He is preceded in death by his parents, brother Steve Konfrst, and nephew Steve Konfrst, Jr.

A celebration of Frank’s life will be held from 2:00 p.m. until 4:00 p.m. on Saturday, November 4, 2017 at the Avon Fire Hall in Avon, South Dakota.
To order memorial trees or send flowers to the family in memory of Frank John Konfrst, Jr., please visit our flower store.