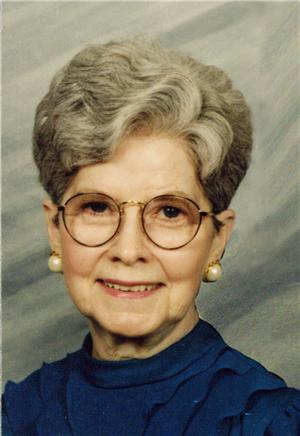 CLERGY
Rev. Jerry Troester
MUSIC
Organist ~ Karen Huether
Congregational Hymns
“Oh Come, Oh Come Emmanuel”
“What a Friend We Have in Jesus”
“Angels We Have Heard on High”
“Silent Night”
CASKETBEARERS
Jackie’s Grandchildren &
Great-Grandchildren
Freda Mae “Jackie” (Peyton) Maag, aged 88, died peacefully on Sunday, December 14, 2014 at the Tripp Good Samaritan Center after a lengthy illness.
Jackie was born on July 4, 1926, in Charlestown, Indiana, the daughter of Charles Peyton and Willie Mae Roberts. On July 27, 1945, Jackie married the love of her life Erwin Emil Maag at Fort Knox, Kentucky. Following Erwin's active service in WWII, they moved back to his hometown of Tripp, SD.  Erwin served in many different positions, such as a member of the National Guard (including tours in Korea), the Hutchinson County Clerk of Courts, and Tripp's Postmaster until his retirement in 1987.
In addition to raising their three children, whom Jackie affectionately called “my three sons,” she was a homemaker and operated the Tripp Village Toggery clothing store for many years.   Jackie enjoyed spending time with her many friends and family, especially when shared around a good game of bridge or bowling. She was a member of Emmaus Lutheran Church in Tripp and the American Legion Auxiliary.
Jackie is survived by her brother, James of Anthony, Florida; sister Eleda Reed of Louisville, KY; sons: Michael of Sioux Falls, Richard (Vicki) of West Chester, OH, and Jeffrey (Gwen) of Tripp; six grandchildren: Christopher (Nikki) of Sioux Falls, Trisha (Andrew Kvasnica) of Manhattan, KS, Matthew (Diana) of Bonner Springs, KS, Justin (Amanda) of Sturgis, SD, Joshua of Little Rock, AK, and Meghan (Nathan Andersen) of Sioux Falls; and 13 great-grandchildren.  Jackie was preceded in death by her husband of 54 years, Erwin, in January 1999, her parents, four brothers, and one sister.
Memorial donations may be sent in her name
to the Alzheimer’s Association, www.alz.org,
or to the charity of your choice.
To order memorial trees or send flowers to the family in memory of Freda "Jackie"  Maag, please visit our flower store.