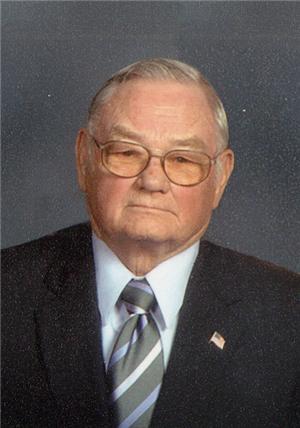 CLERGY
Rev. Ron Shifley
MUSIC
Organist ~ Linda Kronaizl
Congregational Hymn
“How Great Thou Art”
Soloist ~ Linda Kronaizl
“Here I Am Lord”
Gale “Corky” Scholl was born on October 16, 1926 to Fred and Cecilla (Johnson) Scholl in Springfield, SD. He received his education in Springfield graduating in 1945. After graduation he went to work for Northwestern Public Service Co.
In May of 1949 he married Amy Ferwerda. They moved to Scotland, SD in 1950. In 1952 they moved to Menno, where they resided for 31 years. While in Menno, Corky served on the Fire Dept., the City Council, and as a Cub Scout Leader. In 1983 they moved back to Scotland and after being a faithful employee for 45 years with Northwestern Public Service Co. he retired in 1990.
Corky was always concerned about his family, especially his grandchildren. He enjoyed golfing, visiting his children and other relatives, and morning coffee with his friends.
Corky is survived by his wife Amy, one son Mark (Penny) Scholl of Tabor, SD; two daughters Patty (Greg) Gimbel of Rifle, CO; Barbara (Jon) MacKellar of Evergreen, CO; three grandchildren: Marie Krochmal, Bryan (Melanie) Gimbel, and Morgan (Rob) Vrba, three great-grandchildren: Camille Krochmal, Porter Krochmal, and Hannah Claire Vrba; and nephew Joe Scholl.
He was preceded in death by his parents, grandson Garret MacKellar, his brother Eugene, sister-in-law Marjorie, nephew Clayton Scholl, and niece Margene Callahan.
To order memorial trees or send flowers to the family in memory of Gale "Corky"  Scholl, please visit our flower store.