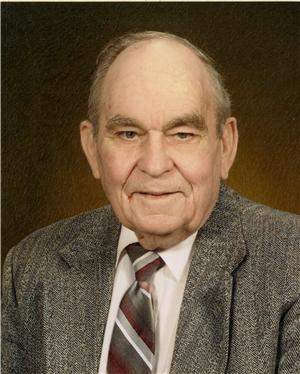 CLERGY
Rev. Duane Coates
MUSIC
Organist ~ Kathy Koenig
Soloist ~ Lisa Knoll
“Serenaded by Angels”
Congregational Hymns
“Amazing Grace”
“How Great Thou Art”
CASKETBEARERS
Bradley Miller
Mike Miller
Edward Miller
Denny Miller
Dave Callies
Mark Mengenhauser
Gerald “Jerry” Miller was born on Tuesday, May 31, 1927 in Canova, South Dakota to Vernon and Velva (Bunce) Miller. He attended Canova High School through the 11th grade. From 1946 to 1947, Jerry served in the U.S. Army infantry. For a short time following his service, Jerry farmed in the Canova area. He later began working for Loonan Lumber, Co. and was transferred to the Fullerton lumberyard in Tyndall in 1953. On August 6, 1960 at the United Methodist Church in Tyndall, Jerry was united in marriage to Vlasta “Lassie” (Ruman) Henderson. In 1975, Jerry retired from the lumberyard, yet kept himself busy by helping many people with his carpentry skills and playing several games of Pinochle with friends and family. He also loved to bowl and golf, so much so that he worked at the Bon Homme Country Club for two years in his retirement. Jerry was proud to be Czech and was a member of the Czech Heritage Society.
Jerry died on Saturday, February 15, 2014 at St. Michael Hospital in Tyndall having attained the age of 86 years, 8 months, and 14 days.
He is survived by four brothers: Robert Miller of Rapid City, SD, Duane Miller of Canova, Harold (Anita) Miller of Lake Andes, and Ronald (Joann) Miller of Canova; step-son, Roger (Marci) Henderson of Bloomington, MN; grandchildren, Jodi (Dustin) Lotz of FL and Sean Henderson of MN; great-grandchild, Zachary Lotz of FL; brothers-in-law, Lumir (Marcy) Ruman of Tyndall and Alois Ruman, Jr. of Tabor; sister-in-law, Esther Rumen of Marquette, MI; and numerous nieces and nephews.
He was preceded in death by his wife Vlasta “Lassie” in 2012, his parents Vernon and Velva, sisters Glenda and Beverly, and in-laws: Ed, Bob, Irene, Marie, and Marcella.
To order memorial trees or send flowers to the family in memory of Gerald "Jerry"  Miller, please visit our flower store.