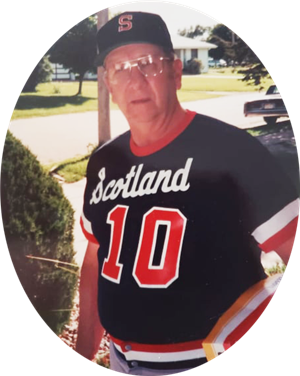 Clergy
Rev. Chuck Asche
Music
Organist ~ Sharon Orth
Soloist ~ Linda Kronaizl
Congregational Hymns
“How Great Thou Art”
“Amazing Grace”
“On Eagle’s Wings”
“Take Me Out to the Ballgame”
Casketbearers
Glen’s Grandchildren
Glen V. Baker, Jr. was born on May 7, 1929 to Glen and Albina (Novak) Baker, Sr in Scotland, South Dakota. He was baptized in the United Methodist Church in Scotland and remained an active member throughout his life. He graduated from Scotland High School. On August 28, 1948, he was united in marriage to Joy Ann Kurvink and they became the proud parents of four daughters: Kathryn (Ray) Magstadt of Elk Point, SD, Beverly (Karen Johnson) Baker of Sioux Falls, SD, Karen (Steve) Dreke of State Center, IA, and Kaye (Al Skogman) Schanbeck of State Center, IA.
Glen was employed as a manager with Cargil, Inc. for 38 years. He managed elevators in South Dakota, Iowa, Minnesota, and Nebraska. Glen took early retirement in 1988 following heart surgery. In his retirement years, he worked as a crop adjuster. He was a lifelong member of the United Methodist Church at O’Neill, NE and Scotland, SD and served on many boards. He also served as a volunteer firefighter and councilman in Scotland. They then moved back to Scotland so Dad could again get involved in his favorite past time – baseball.
Glen’s lifetime interest was in sports, in which he received many awards. He coached the American Jr. Legion and amateur baseball teams, making many trips to state tournaments and bringing home several championships. His greatest memory was when his legion team was presented the sportsmanship trophy. Glen was a charter member of the SD State Umpire Association and served as Vice President as well as was voted into the Umpire’s Hall of Fame. Glen was also voted into the SD Amateur Baseball Hall of Fame in 1991. He served as President of the Scotland Athletic Association for several years. He was active in improving the Scotland ballpark, announcing many of the games, and was presented the Scotland Sport’s Day Honoree Award in 1998. In 2003, he received recognition for 53 consecutive years of attendance at the SD Amateur Baseball Association Annual meeting. His greatest honor was to have the Scotland ballpark named Glen Baker Field.
Glen passed away on Sunday, June 30, 2019 at the Good Samaritan Society of Scotland having attained the age of 90 years.
He is survived and remembered by his 4 daughters; 9 grandchildren; 9 great-grandchildren; brother Ken (Ann) Baker of Hurricane, Utah; and sister Delores Auch of Sioux Falls, SD. He was preceded in death by his parents, wife, and an infant brother.
This obituary was written in loving memory by the family of Glen Baker, Jr.
To order memorial trees or send flowers to the family in memory of Glen V. Baker, Jr., please visit our flower store.