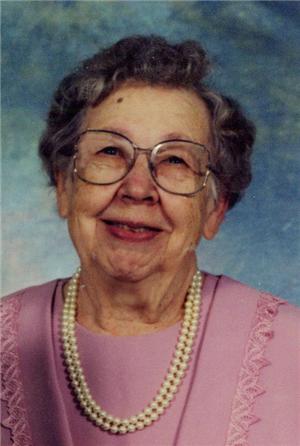 CLERGY
Rev. David W. Ellis
MUSIC
Organist ~ Harriet Schaeffer
Congregational Hymns
“Rock of Ages, Cleft for Me” #376
“The Lord’s My Shepherd, I’ll Not Want” #436
“Beautiful Savior” #657
“Abide With Me! Fast Falls the Eventide” #552
Instrumental Solo by Neil Hebbert
CASKETBEARERS
All of Helen’s Grandchildren
Helen Henrietta Gunderman was born Saturday, November 16, 1918 in Fulda, Minnesota, to John and Henrietta (Homfeld) Gunderman. She was baptized and confirmed at the Lutheran church in Fulda. She grew up on a farm about three miles south of Fulda and was an active participant in the farm and house work involved with a large family. Helen attended rural country school and graduated from Fulda High School in 1935. She attended Normal Teacher Training in Jackson, Minnesota, for one year, and by fall of 1936 at the young age of 17 was teaching in the rural school. She continued to teach for six years.
In 1938 she met Donald Hebbert when he and some other South Dakota men sought farm work in Fulda. They were picking corn and Donald picked mom. They were married December 29, 1943, and one of many new chapters began. The couple began farming on the Hebbert homestead farm near Scotland.
Like many young couples the early years included barn building, planting fruit trees, and shelterbelts. They continued to farm and participate in the Scotland community through their adult lives. Raising five children, Barbara, Ruth, Roger, Marcia, and Julie, Helen guided them through 4-H activities, Brownies, academics, band and piano lessons, sports, church choir, and Sunday school. She often served in leadership capacities in their activities. She almost always said yes to slumber parties on the living room floor and made “mean” caramel rolls which are remembered with fondness by many friends and family.
Helen loved flowers and gardening, often waging war against marauding chickens and escaped pigs. She was equally skilled in the kitchen and outdoors. She milked cows, chased escaped cows, and raised poultry. She frequently helped Don and the kids baling hay, mastered extracting stuck tractors and pickups, and enjoyed pasture picnics and wild flowers. She was a wonderful grandmother for reading stories and taking the grandchildren to jump on the big round bales.
In the 80’s Helen assumed the organist responsibilities for St. Paul Lutheran Church and continued in that role until about 2000.
Donald moved to the Good Samaritan Center in Scotland in May of 2003. Donald died in December of 2003 and Helen continued to live on the farm place. She also spent time visiting her children and grandchildren. After health concerns Helen moved to the Good Samaritan Center in 2005. Helen passed away on December 30, 2011, at the age of 93 years, 1 month and 14 days.
Survivors include her five children: Barbara (James) Jessen of Lake Preston; Ruth (Atilla) Sarar of Garretson; Roger (Deanna) Hebbert of Longmont, Colorado; Marcia (Robert) Canter of Denver, Colorado; Julie (Scott) Muirhead of Presho; twelve grandchildren: Andy (Masayo) Jessen, Clay (Portia Curlee) Jessen, Colleen Sarar, Ariana Sarar, Neil Hebbert, Alex Hebbert, Anne Canter, Kate Canter, Ian Muirhead, Sarah Muirhead, Emily Muirhead, and Bryson Muirhead; and one great-granddaughter, Ema Nishiyama Jessen. She is also survived by her sister, Ruby Deal of Lawton, Oklahoma and numerous favorite nieces and nephews.
Preceding her in death were Donald, her parents, John and Henrietta Gunderman, her parents-in-law, Lorenzo and Edith Hebbert, and eight siblings.
To order memorial trees or send flowers to the family in memory of Helen Henrietta Hebbert, please visit our flower store.