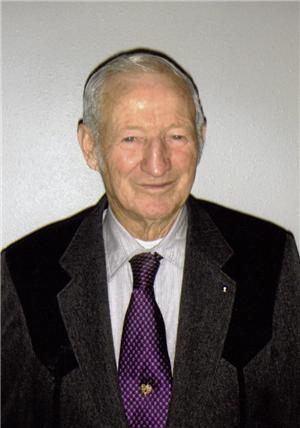 CLERGY
Rev. Jonathan Vehar
MUSIC
Organist ~ Jan Kocer
Special Music ~
“Save a Place for Me” by Carrissa Pietz
“I Can Only Imagine” by Natasha Auch
Congregational Hymns
“How Great Thou Art”
“Amazing Grace”
HONORARY CASKETBEARERS
Helmuth’s Grandchildren
and Great-Grandchildren
ACTIVE CASKETBEARERS
Nathan Fischer
Nicholas Fischer
Pete Diercks
Joe Walloch
Matthew Sayler
Mark Sayler
Seth Ireland
Justin Syrovatka
Helmuth “Hally” F. Fischer was born on Tuesday, December 17th, 1929 to Fred and Martha (Guericke) Fischer in Menno, SD.  He was baptized as an infant into the faith and was confirmed at Peace Lutheran Church, Menno, SD on May 28, 1944.  Throughout his life, Helmuth enjoyed farming and did so west of Kaylor and southeast of Scotland.  On May 20, 1955, Helmuth was united in marriage to Ruby Colwell at the United Methodist Church in Scotland.  For a short time, Helmuth worked for a local electrician until he opened his own business, Fischer Electric in Scotland, in 1947.  He was a hard worker who truly loved his job.  After selling the business to his son, Bill, Helmuth continued his electrical work, helping his son out where he could.
In his spare time, Helmuth loved to take fishing and camping trips with his family.  Later in life, he and Ruby enjoyed wintering in Texas, where Helmuth worked for a printing shop that created Christian material that was dispersed into Mexico.  He also had the privilege of making two trips to Mexico to wire homes.  In 1976, Helmuth joined the Gideons International and was active in their prison ministry and outreach.  He was a devote Christian who served in many different church positions and taught Sunday School for many years.  Helmuth was a kind and generous man who held church and family as the most important things in his life.
Helmuth passed away on Thursday, June 4, 2015 at Dougherty Hospice House in Sioux Falls, South Dakota, having attained the age of 85 years, 5 months, and 18 days.
He is survived and remembered by his wife of 60 years, Ruby Fischer of Scotland; children: William (Cheryl) Fischer of Scotland, Deborah (John) Weidenbach of Sioux Falls, Julie (Bob) Walloch of Lesterville, JoAnn (Lyle) Ireland of Scotland, and Donna (Eddy) Syrovatka of Sioux Falls;  16 grandchildren;  19 great-grandchildren;  brothers: Ernest Fischer of Scotland and Gebhardt (Marcella) Fischer of Menno;  sisters: Olga (Ruben) Mehlhaff of Scotland, Hildegard (Marvin) Mehlhaff of Yankton, and Bertha (Alton) Mettler of Menno; and brother-in-law, Clinton Mehlhaff of Wagner.
He was preceded in death by his parents, sisters Lorentine (Erwin) Walz and Marie Mehlhaff; sister-in-law Ruth Fischer and granddaughter Nicole Sayler.
To order memorial trees or send flowers to the family in memory of Helmuth F. Fischer, please visit our flower store.