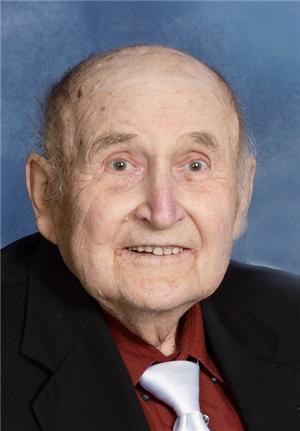 CLERGY
Rev. Ron Shifley
MUSIC
Organist ~ Sharon Orth
Soloist ~ Linda Kronaizl
“Wind Beneath My Wings”
Congregational Hymns
“What a Friend We Have in Jesus”
“Gott Ist Die Liebe” (God Loves Me Dearly)
“Amazing Grace”
HONORARY CASKETBEARERS
Members of the Rotary Club of Scotland
CASKETBEARERS
Zach Rada
Adam Rada
James Streyle
Seth Weidenbach
Brian Hoffman
Jerrad Van’t Hul
Henry Emil Weidenbach was born Sunday, June 10, 1923 at Olivet, South Dakota to Emil and Emma (Gall) Weidenbach. He graduated from the 8th grade on June 1, 1938. Henry was united in marriage to Gladys Baltzer on August 14, 1949 at the First Congregational Church in Kaylor. Together they made their home on the family farm near Olivet in Hutchinson County where Henry diligently farmed the land until his retirement and subsequent move to Scotland. He loved sports, but was especially devoted to cheering on Scotland teams. On June 25, 2006, Henry was named Scotland Sports Day Honoree in grateful recognition for his many years of outstanding service and dedication to Scotland baseball. He was a member of the Rotary Club of Scotland for over 20 years and on June 12, 2013, was once again acknowledged with an honorary membership. He also served his community as a member of church, school, township, and telephone boards.
Henry died on Friday, November 8, 2013 at the Good Samaritan Society of Scotland at the age of 90 years, 2 months, and 1 day.
Henry is survived by his wife, Gladys, of Scotland; one daughter, Janice Kay (Robert) Rada of Scotland; two sons: Jay Lynn (June) Weidenbach of Scotland and Joel Alan (Rebecca) Weidenbach of Canistota; ten grandchildren, seventeen great-grandchildren, and five great-great-grandchildren; one sister, Johanna Petersen of Plymouth, Minnesota; and three brothers-in-law.
Henry was preceded in death by his parents, Emil and Emma Weidenbach, his stepmother, eight sisters, two infant brothers and one infant grandson.
To order memorial trees or send flowers to the family in memory of Henry Emil Weidenbach, please visit our flower store.