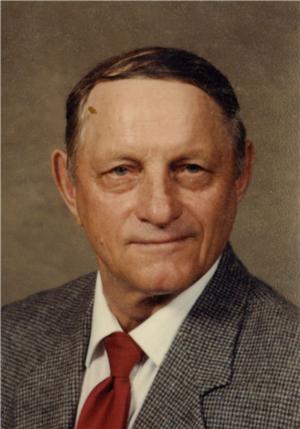 CLERGY
Rev. David W. Ellis
MUSIC
Organist ~ Harriet Schaefer
"Sleep, Soldier Boy" ~ Patty Diede
Congregational Hymns
"Amazing Grace"
"What a Friend We Have in Jesus"
"How Great Thou Art"
CASKETBEARERS
Herb’s Grandchildren
Herbert Henry Raker was born on Wednesday, May 11, 1921 at home in Plum, South Dakota to Gottlieb and Margaret (Poppe) Raker. At six years of age Herb entered the Beloit Orphanage School near Canton, South Dakota and stayed through the 8th grade. After that, he moved to Scotland South Dakota where he worked various jobs until entering the Army Air Force at age twenty. He served in the South Pacific during World War II and his unit was awarded two Presidential Unit Citations, and six Campaign Citations. Herb was honorably discharged in October of 1945, at which time he moved back to Scotland where he farmed and worked for Scotland Transfer. On August 28, 1949, Herb was united in marriage to Vada Sunderman, and together they raised five children.
Herb lived a full and happy life. Herb was unavailable to friends and family between the hours of 10am to 11am, as he dedicated his time to Bob Barker and the Price is Right. He will be remembered for his humor, love for gardening and the St, Louis Cardinals, and participation in the VFW. Herb was a great inspiration for his children and grandchildren for his hard work and dedication to family. He will be forever in our hearts and will never be forgotten. Herb passed away on Saturday, February 9, 2013 at the Royal C. Johnson Memorial Veteran’s Hospital in Sioux Falls, South Dakota, having attained the age of 91 years, 8 months and 28 days.
He is survived by his wife Vada; his children: Neta (Turk) Peterka of Scotland, Mike Raker of Scotland, Cindy (Robert) Kvick of Sacramento California, Nancy (Jeff King) Ramsey of Riverside, Iowa, and Mark Raker (and friend Jinjer) of Scotland; ten grandchildren: Justin, Robert, Heidi, Heather, Niki, Erin, Kyle, Chelsea, Lindsey, Paige; a great-granddaughter, Savanna; a sister, Edith Anderson, and half-brothers Milo and Glen Hanson.
He was preceded in death by his parents, Gottlieb Raker and Margaret Raker Hanson; two brothers: his twin, Robert, and Donald; and three sisters: Ruth, Ethel, and Verna.
To order memorial trees or send flowers to the family in memory of Herbert Henry Raker, please visit our flower store.