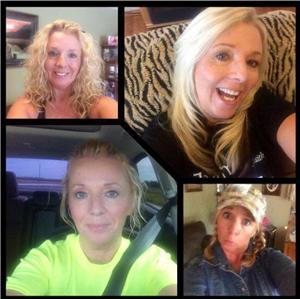 Clergy
Rev. Ron Shifley
Music
Organist ~ Sharon Orth
Congregational Hymns
“Are You Washed in the Blood?”
“Beyond the Sunset”
“Softly and Tenderly”
“I’ll Fly Away”
Casketbearers
Steven Kayser, Izaak Goldammer, Riley Nooney,
Paul Hovorka, Travis Stockholm, & Ryan Howes
I thought of you with love today but that is nothing new. I thought about you yesterday and days before that too. I think of you in silence, and I often speak your name. All I have are memories, and your picture in a frame. Your memory is my keepsake; with which I will never forget. God has you in his keepings, and I have you in my heart.
Jackie Dvorak, or better known as Jackie Kay Delone Howes, was born on May 26, 1967 to Ron and Dot Howes in Parkston, South Dakota.  Directly out of high school, she worked as a nurses’ aide at the nursing home in Parkston. In 1986, she was united in marriage to Kevin TerMeer and they had a daughter, Natasha. Jackie worked as a guard in the prison system for a number of years in both Springfield and Yankton. After that she received her degree in massage therapy and began working out of her home in Scotland. On July 20, 1996, Jackie was united in marriage to Laurence Nooney and they had two children, Riley and Kelsi. Years later, she went back to her passion with helping the elderly and began to work at the Good Samaritan Center in Scotland as the activities director. On February 14, 2007, Jackie was diagnosed with breast cancer. Jackie took heart and bravely underwent mastectomy surgery. It was successful and one year later on February 14, 2008, a cancer-free Jackie was united in marriage to Ron Dvorak and gained a step-daughter, Rachael. Most recently, Jackie had been working in Scotland for North Western and then at Fischer Electric.
Jackie was strong, motivated, caring, helpful, and a loving individual. She has touched many people’s lives with her smile and personality.  She enjoyed kayaking, playing guitar, taking her dog Maci for a ride on her bicycle in the basket, watching her kids play at all of their sporting events, and singing with the Happy Memories Band.
At the age of 49, Jackie Dvorak passed away in her home in Scotland on Saturday, October 29, 2016. She is survived by her husband Ron Dvorak; four children: Natasha (Izaak) Goldammer, Riley Nooney, Kelsi Nooney, and step-daughter Rachael Dvorak; two grandchildren: Jakoby and Tallie Goldammer; four sisters: Debbie (Doug) Stockholm, Beth (Russell) Jelsma, Darla (Jerry) Hovorka, Kelli (Harlan) Tjeerdsma; one brother Ryan (Victoria) Howes; step-mother Connie Howes; and many nieces, nephews, cousins, and friends.
Jackie was preceded in death by her parents Ron and Dot, grandmother Elizabeth Kost, uncle Arnie Howes, and cousin Troy Howes.
To us you’re a mother and to others you’re a wife, sister, and a friend. One thing we have in common is we will all miss you every day. Words can’t describe what you meant to us all, but as long as you know we love you, that’s all you need to know.
To order memorial trees or send flowers to the family in memory of Jackie  Dvorak, please visit our flower store.