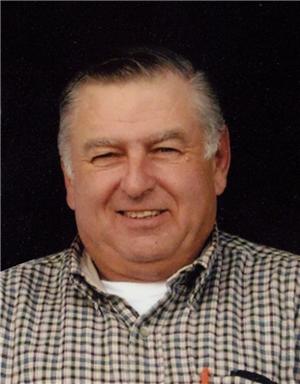 CELEBRANT
Fr. Mathew Vazhapplly
MUSIC
Organist ~ Martin Sieverding
Processional Hymn ~ "Amazing Grace"
Offertory Hymn ~ "You Are Mine"
Communion Hymn ~ "On Eagle's Wings"
Recessional Hymn ~ "Abide With Me"
HONORARY CASKETBEARERS
Jim’s Family, Co-Workers, Past & Present Firemen and Lifelong Community Friends.
CASKETBEARERS
Members of the Scotland Volunteer Fire Department
Dick Behl
Steve Flett
Jim Foley
Bob Green
Dennis Kronaizl
Mike Mehrer
James Charles (Jim, “Street”) Cisar was born on Saturday, November 12, 1946 in Scotland, South Dakota. His parents were Charles and Adeline (Placek) Cisar. He grew up in Scotland and graduated from Scotland High School in 1964. He worked at a couple different jobs during and after high school before beginning a life-long career at the Scotland Redi-Mix. He continued working there until July 2012 having dedicated four and a half decades of service. At the Redi-Mix, Jim spent his time performing many tasks such as master mechanic, truck driver, batch mixer and bookkeeper.  Jim was an avid mechanic on the side as well and enjoyed spending time tinkering with and fixing accident-engaged vehicles. Much of Jim’s time was spent seeking out the perfect purchase, whether it was a car, boat or firearm. Jim enjoyed spending time with his friends traveling to other towns to shop firearm tradeshows where he often engaged in purchasing, selling or trading with vendors. Jim enjoyed attending high school sporting events such as football and especially basketball games. Jim was a very spiritual man who loved his Lord. He was an active member of St. George’s Catholic Church and a member of the Knights of Columbus. Jim spent 46 years as a major part of the Scotland Volunteer Fire Department where he spent 16 prestigious years as the Fire Chief. Jim enjoyed fishing and hunting and countless trips to Lake Henry just to see if anything was biting. He also enjoyed trapshooting on a local trap league at the Scotland Sportsman’s Club where he was a member for 40 plus years and spent many years on a Scotland bowling team. Jim was well known throughout the Scotland community where he was born and raised. His endless smile will be dearly missed.  Jim died peacefully on Thursday, January 10, 2013 at the Scotland Good Samaritan Society of Scotland, South Dakota, having attained the age of 66 years, 1 month and 29 days.
Jim’s memory will live forever in the hearts of his mother, Adeline Cisar of Scotland; his nephews, Patrick (Jennifer), Topher (Amy) and Jon; his great-nephew, Hudson; his great-nieces, Hannah, Hailey, Hadyson, Georgia and Caroline; his sister-in-law, Barb Cisar of Scotland; his aunt, Vesta Blachnik of Sioux Falls and numerous cousins.  He is also survived by a multitude of lifelong community friends of which some would even consider him as an extended part of their family.
Jim was preceded in death by his father, Charles Cisar in 1985 and his brother Don Cisar in 2010.
To order memorial trees or send flowers to the family in memory of James Charles "Street" Cisar, please visit our flower store.