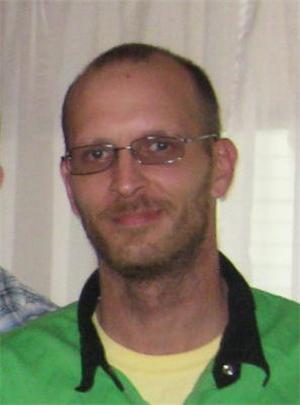 Jeremy Joel Ritter, 40, of Calhan, Colorado passed away on July 10, 2016 as a result of a car accident.
Jeremy was born on February 15, 1976 to Gerald and Joan Ritter of Scotland, South Dakota. He graduated from Scotland High School in 1994. He spent several years installing siding and gutters, but his passion for auto mechanics led him to a career as a top technician for Midas in Colorado Springs, Colorado. His goal was to open his own shop someday.
He had a special musical talent as evidenced by his participation in high school band, playing guitar in several local bands, and loved to do karaoke.
He leaves behind his daughter Breanna Ritter of Minneapolis, MN; his parents; sisters Melissa (William) Graham of Mitchell and Tamara Ritter of Rapid City; brothers: Ryan (Dawn) Ritter of Tea, Nathan Ritter of Renner, and Ethan Ritter of Sioux Falls; three nieces; three nephews; aunts, uncles, cousins, and the many friends he made along his journey.
He is preceded in death by his maternal and paternal grandparents Francis and Mae Ritter and Frank and Esther Burke.

To order memorial trees or send flowers to the family in memory of Jeremy  Ritter, please visit our flower store.