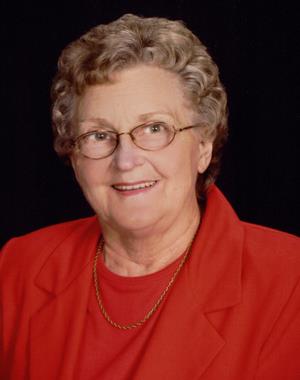 Joan Rothschadl, age 82 of Tyndall, SD died Thursday, April 30, 2020 at Avera Sacred Heart Hospital in Yankton. Funeral Mass is 2:30 p.m. Tuesday, May 5, 2020 in the outdoor chapel at St. Leo Catholic Church Tyndall. Visitation will be from 1:00 to 2:30 p.m. Visitors will comply to Coronavirus guidelines of 10 persons with 6’ social distancing. The Mass will also be live stream at www.goglinfh.com Joan Rothschadl.
Joan was born Friday, April 22, 1938 to Emil and Helen (Andersen) Pravecek in rural Tyndall. She attended country school, graduating from Scotland High School in 1956. In her teen years, Joan babysat. She met her lifelong partner at age 16. Their first date was Flag Day, June 16. After high school she worked at Kiltie Scotland Café.
Joan married the love of her life, Duane Rothschadl April 16, 1958 at St. George Catholic Church in Scotland. They recently celebrated their 62nd wedding anniversary. Joan prided herself in the kitchen. Kolaches, apple pies and dumplings were always favorite family requests. As an enterprising farm wife she made a side business of selling eggs to Gene’s GW and locals on a regular basis. An egg never left the farm without being meticulously washed. Each year she raised hundreds of chickens from baby chicks to table.
Joan found contentment with sewing and her grandchildren knew she could fix just about anything with a needle and thread. Their arrangement was that Duane would catch the fish and Joan would clean and cook them. She was a league bowler for 20+ years. Joan was a volunteer hair dresser at Good Samaritan Center Tyndall. Joan was a faithful member of St. Leo Catholic Church. She was a lifetime member of St. Leo’s Altar Society. She served as financial guardian at St. Leo’s for 20+ years. You could frequently find Joan socializing during coffee time at the café as she enjoyed this time with her friends.
Joan was a doting grandma and great grandma. She was always happy to be around them and proud to talk about them to others. In their retirement years, Joan was committed to weekly date nights with Duane. Energetic, good natured, strong and hard working all come to mind when describing Joan. She found relaxation in watching game shows and doing crossword puzzles. Her favorite most memorable movie was Alfred Hitchcock’s “The Birds.” We should all follow Joan’s life advice, “Go with the flow.”
Survivors include her husband Duane; children Keith (Julie) Rothschadl of Scotland; Janet (John) Pesek of Tyndall and Judy (Lawson) Coke of The Colony, Texas; grandchildren Justin (Brittany) Rothschadl, Jenna (Tyler) Miller, Jaclyn Rothschadl, Kelsey (fiancé Derrik Dvoracek) Pesek, Briannna Pesek, Jack and Bryson Coke; step grandchildren Tom (Melissa) Pesek and Erin Cotton; great grandchildren Jett, Brecken, Myles and Nora Joan; brother Robert (Georgianna) Pravecek and sister Faye (Frank) Burke.
She was preceded in death by her parents Emil Pravecek and Helen Machacek.

To order memorial trees or send flowers to the family in memory of Joan  Rothschadl, please visit our flower store.
Open