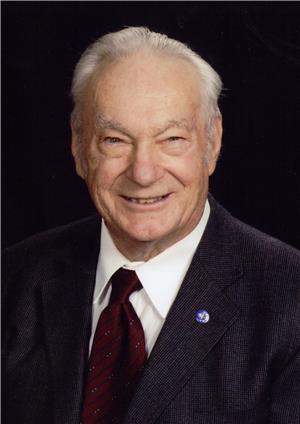 Joseph Victor Becvar was born in March 1928 to Peter V. and Josephine (Pobuda) Becvar, the youngest of five children on a farm north of Tyndall. He attended the rural one room school district 19, graduated Tyndall High School Class of 1946. Immediately after graduation Joseph enlisted in the military. During service at Randolph Air Force base in San Antonio, Texas he was nominated to attend Counter Intelligence Training School in Baltimore, Maryland. Upon completion of training there he served with the occupation forces in Japan, assigned to the 441st Counter Intelligence Detachment in Tokyo, serving from 1947 to 1949. The 441st CIC Detachment was awarded a Presidential Unit Citation from President Harry Truman in 1948. Upon his discharge in June 1949 he attended Yankton College, the Springfield USD where he earned his Bachelor of Science Degree, went on to post graduate school at South Dakota State College in Brookings and University of Oregon, Eugene, Oregon.
During his college years he was married in December 1950 to Marcella Simek in Tyndall. They both continued their education at Springfield. He was a teacher at the Watertown High School in 1952-53 after which they moved to Oregon, then on to California where he was active in real estate sales and development. In 1968 he chose a less strenuous life style and became employed with the Federal Housing Agency at their Fresno office. Upon his retirement he was engaged in the real estate appraisal field in Fresno, California.
Joseph and wife Marcella enjoyed travel and cruises. Joseph was an active member of the Elks Lodge for over 50 years, board member of the Light Metals Research Laboratory in Santa Clara, California, past Chapter President California Central Valley Chapter of the American Society of Appraisers, the American Legion Tabor Post and NARFE, National Association of Active and Retired Federal Employees Association.
Joseph V. Becvar, age 92, passed away Wednesday, November 4, 2020 at Good Samaritan Society Tyndall.
He is survived by his wife of 69 years Marcella, a son Marcus of Fresno, California and two granddaughters Kylie and Skylar of Fresno, California.
Preceded in death are his parents, Peter V. Becvar and Josephine (Pobuda) Becvar; two brothers Peter C. Becvar and Wesley A. Becvar and two sisters Anneta Kubel and Bernadine Matuska.

To order memorial trees or send flowers to the family in memory of Joseph Victor Becvar, please visit our flower store.
Open